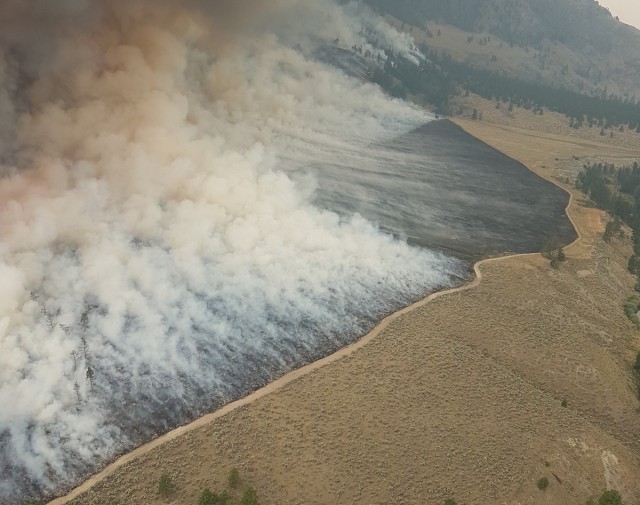 Photo: BCWS
A controlled burn at the Snowy Mountain Wildfire.

An update late on Friday from the BC Wildfire Service now has the Snowy Mountain mapped at 10,911 hectares in size.

The fire, now the largest currently burning in B.C., has exploded in size since being mapped at just over 3,000 hectares on Monday.

There are now 60 firefighters, three helicopters and four pieces of heavy equipment at the blaze. Structural protection units are also set up.

Fire information officer Claire Allen says on Friday, crews worked to respond to growth on the fire's north and south flanks and build containment lines, as well as do burn-off operations to prevent the fire from jumping onto homes and other structures.

Winds have been plaguing fire suppression efforts all week, and Allen says they were seeing winds of about 30 kilometres per hour again Friday evening.

Allen added no structures have been impacted by the fire. Twenty-four homes on Chopaka Road are under an evacuation order, put in place on Friday morning.

The Snowy Mountain wildfire is now estimated to be 10,300 hectares in size, showing significant growth since it was last pegged at just under 6,600 hectares on Wednesday afternoon.

"The size may change once a more accurate fire perimeter can be mapped once smoke dissipates," the BC Wildfire Service says in an online update.

Growth occurred on the north and south flanks of the fire on Thursday night along the Similkameen River, fanned by "unpredicted and sustained" winds gusting between 30 and 50 kilometres per hour, the BCWS says.

Twenty-four properties are evacuated as a result of the fire, along Chopaka Road south of Cawston, while more than 800 others are on evacuation alert.

There's nothing to indicate any structures have been impacted by the blaze.

The Snowy Mountain fire began during a thunderstorm on the evening of July 17. Its latest size estimate makes it the largest of the 446 wildfires currently burning in B.C.

The Lower Similkameen Band has issued 21 new evacuation orders as a result of the Snowy Mountain wildfire and has rescinded five other orders.

The new evacuation order is for properties on Chopaka Road with addresses between 525 and 891, which neighbour the three properties within RDOS boundaries that were also evacuated today.

The LSIB has rescinded evacuations for properties in the 300-block of Susap Creek Road, which are north of the new evacuation orders.

The Snowy Mountain blaze is still estimated at 6,600 hectares. While listed as being zero percent contained, BC Wildfire Service firefighters are working to burn off fuels on the fire's east flank, which is closest to properties.

More than 800 properties in Keremeos and Cawston remain under an evacuation alert.

The Regional District of Okanagan-Similkameen has ordered the evacuation of three properties near the Chopaka Bridge due to the Snowy Mountain wildfire.

These orders are in addition to those issued by the Lower Similkameen Indian Band Thursday for five homes on Susap Creek Road.

The BC Wildfire Service says it is continuing burn-off activities at the base of the hills to eliminate fire fuel on the east flank. The ignitions are being supported by bucketing helicopters.

A spot fire caused by embers from the Snowy Mountain wildfire on the Cawston side of the river has been extinguished by the Keremeos Volunteer Fire Department and BC Wildfire Service.

Fire Chief Jordy Bosscha said the fire — which sparked just south of the end of Beecroft River Road — prompted a full response from the department.

He said there were plenty of embers flying last night, but Beecroft was the only spot fire. Volunteer firefighters will be continuing evening patrols to mitigate.

The BC Wildfire Service hopes cooler temperatures and some cloud cover will give crews a chance to make progress on the 6,600-hectare blaze.

“Structural protection specialists will continue to assess properties on the valley bottom, moving south along the Chopaka Road,” the BCWS said online Friday morning. “Ground crews will continue with yesterday's successful burn-offs on the fire's southeast flank as safe conditions allow in order to stop the fire's advance and protect adjacent communities.”

Winds are expected to be north-northwest with gusts up to 35 km/hr, but conditions have been changing quickly over the past few days.

The fire is very visible, particularly to Cawston and the Lower Similkameen Indian Band.

More than 800 properties in Keremeos, Cawston and surrounding area remain under evacuation alert and five homes are under order on the LSIB reserve.

The Snowy Mountain wildfire has jumped the Similkameen River.

The BC Wildfire Service says a one hectare spot fire has been sparked at the end of Beercroft River Road in Cawston, burning in deciduous type fuel and brush. The spot fire is about one kilometre south of the end of the road in an oxbow. Residents in Keremeos report seeing several fire trucks heading towards the fire site.

“Crews are responding to right now in conjunction with the Keremeos Fire Department and heavy equipment is en route,” the BCWS said online late Thursday.

Forty BC Wildfire crew members spent the day Thursday lighting controlled burn offs at the base of the mountains in an attempt to slow the fire’s advance. Night crews will work overnight with support from the Keremeos Fire Department. The most recent estimate still has the fire at 6,600 hectares.

“Due to strong winds coming downslope tonight up to 50 km/hr, fire activity continues to be highly vigorous,” the BCWS said.

The BC Wildfire Service says more information will be released early Friday morning.