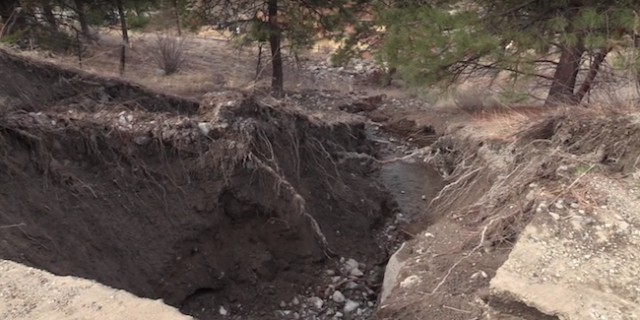 Photo: Colton Davies
Part of the KVR trail came down onto a home on Gammon Road during heavy rain in March

A Naramata couple has filed a lawsuit against a nearby development for a landslide that crashed onto their property in March.

Alex and David Lea filed a civil claim Monday in BC Supreme Court against the Kettle Ridge Development Corporation, alleging the developer has not adequately managed stormwater, leading to a landslide that forced them from their home for five days.

The slide came down on March 22 during record-breaking rains, leaving a three-foot wall of mud and debris against the back of the Lea’s Gammon Street home.

The lawsuit alleges the company took no steps to deal with water coming through the Kettle Ridge Development above the KVR trail.

“In particular, the defendant proceeded to remove the forest cover and overburden down to bare rock without any measures to cope with the inevitable increased runoff,” the claim states.

The lawsuit seeks damages and a stop-work order to force the developer to improve its drainage system.

When contacted by phone, Kettle Ridge director Kelly Sherman said he hasn’t seen the lawsuit yet, but they’ve done everything they can to manage stormwater with ditches and two holding ponds.

“We’ve spent hundreds of thousands of dollars,” he said, pointing a finger at the provincial government for failing the to manage the water once it left the development.

“It was supposed to go down from the ditch on the KVR to the storm system that the [Ministry of Transportation] just now installed, they hadn’t installed that yet,” he said. “That would have theoretically taken the water down.”

Sherman says they’ve been lobbying the province for improved stormwater management in Naramata for years now.

Noting that a whole months worth of rain fell on March 22, Sherman suggested that little would have changed if their development wasn’t there.

“I do feel for them, nobody wants to see that happen to anybody,” he said. “I wish we could help them, but you could put all the money in the world into it and unfortunately we are not going to be able to affect it.”