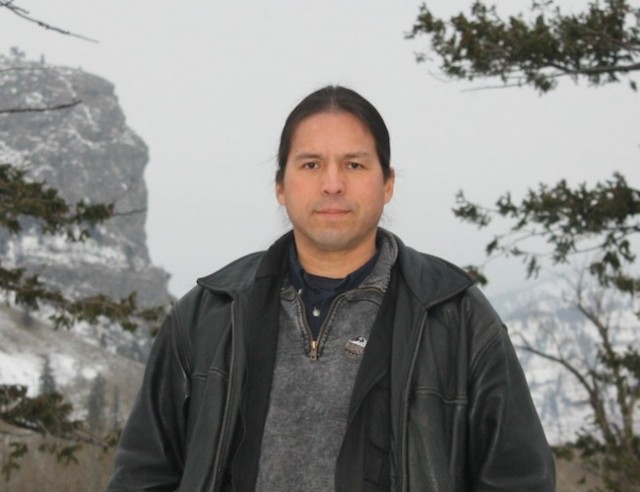 A First Nations man accused of smuggling a pair of handguns into Canada at Osoyoos opened his trial Monday by declaring the judge and court has no jurisdiction over him.

Alex Louie — also known as Senk’lip — verbally wrangled with Judge Arne Silverman repeatedly in Penticton court, refusing to enter a plea to each of the nine counts read against him.

“I object in regards to the jurisdiction of this court, so asking me that before you prove your jurisdiction is putting the cart before the horse,” he said.

Senk’lip is accused of attempting to smuggle two CF380 Hi Point handguns into Canada at the Osoyoos crossing on Feb. 1, 2017 by wiring them to the bottom of his vehicle.

A 12-person jury was selected Monday for the week long trial, in which the Crown expects to call four witnesses. However, the jury was absent for the afternoon so Senk’lip — who is representing himself — could formally make his jurisdiction argument.

“It is not the duty of Indian peoples to prove we are citizens of our nation, the burden of proof is on the judge to prove I Senk’lip… am a Canadian citizen," he said, adding for the court to continue to assume jurisdiction over Indian peoples constitutes "high treason."

The lack of a treaty between the Crown and his First Nation was the cornerstone of Senk’lip's argument, which repeatedly referenced the residential school system, 60s scoop and genocide of First Nations. He also attempted to renounce his Canadian citizenship.

Crown prosecutor Clarke Burnet rebutted Senk’lip by referencing multiple previous rulings that stated everyone on Canadian soil — citizen or not — is bound by the country’s laws.

Judge Silverman will be taking the evening to consider Senk’lip’s jurisdiction argument before deciding whether to let the trial proceed with the jury on Tuesday.