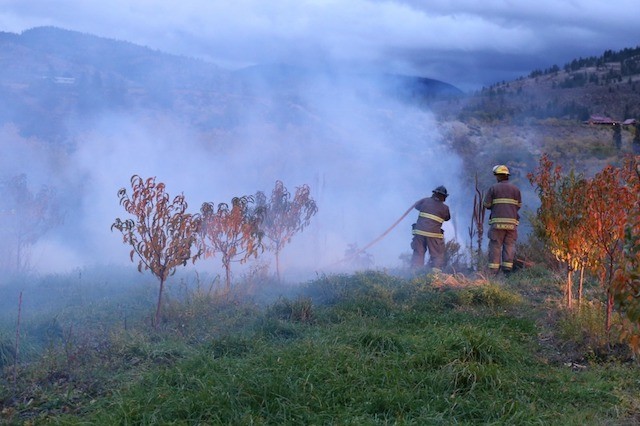 Fire crews in Oliver had a busy evening on Thursday, responding to a pair of unrelated calls about 15 minutes apart.

The Oliver Fire Department responded to a shed fire at about 5:35 p.m., at Highway 97 and Nettle Road.

Fire department spokesperson Rob Graham said crews were able to contain the fire to just the shed and had it out quickly.

At 5:50 p.m., crews were called to a grass fire at Sawmill Road near Oak Avenue.

Graham said the fire grew to an estimated 200-square-feet in size, as northeast winds pushed the fire up a hillside. The fire wasn't in a forested area, but some trees in close proximity fuelled the flames.

Crews had the fire extinguished at about 7:15 p.m., and Graham said no homes were in immediate danger.

"It's still very dry... we've had a little bit of rain, but the rain that we get really doesn't saturate the ground deep enough to help any," Graham said.

The cause for both blazes remains under investigation.