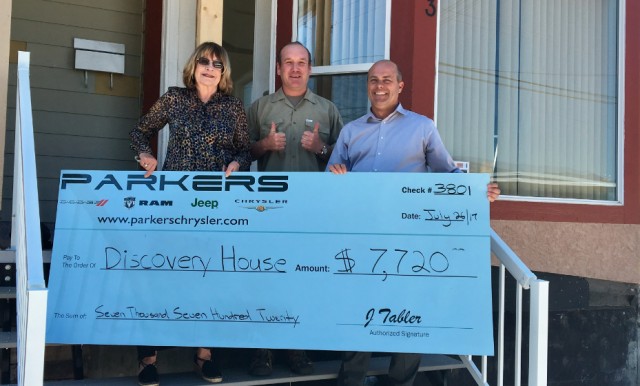 “This is an immense help," said executive house director Jerome Abraham. "We had no idea it would be such a generous amount."

Parkers Chrysler raised $7,720 during their June Fundraiser for Discovery House’s new building on Winnipeg Street by committing $100 for every vehicle sold and $10 for every oil change service during the month of June.

Janet Parker, mother of the late Colin Parker, then topped up the dealership’s fundraising efforts with a personal cheque for Discovery House in the amount of $17,280 for a total donation of $25,000.

“Colin would have turned 40 in June and if I can help another mother and family avoid this tremendous loss, then I will," said Janet Parker as she handed the cheque over to Abraham. "It’s organizations like Discovery House that need the community’s full support to help those who suffer from addiction”

Colin Parker passed away losing a battle with addiction in October

Following the presentation of the donation cheques,  Parker and Parkers General Manager, Jim Tabler, were taken on an informal tour of the new building that will house up to 13 clients.

“We will be dedicating a wing of Discovery House in Colin’s honour at an open house later in the summer,” said Jerome Abraham. "The home is slated to open its doors to clients sometime in August."

“It is an impressive facility and we look forward to an ongoing relationship with Discovery House," Tabler said.