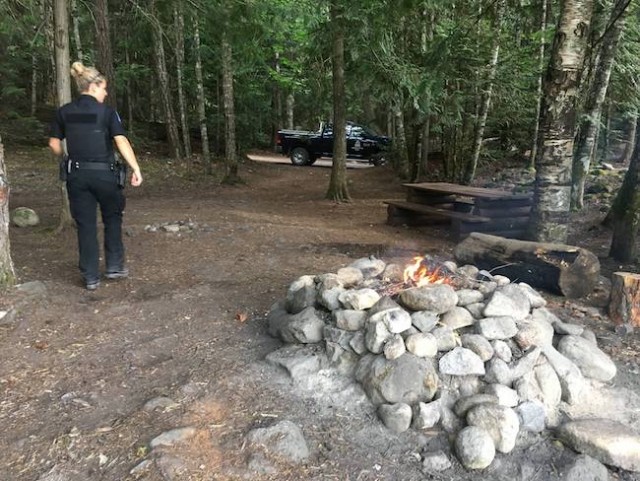 Conservation officers in the Interior, along with the B.C. Wildfire Service, have been spending 24 hours a day patrolling the woods. All of B.C. is under a fire ban, with the exception of Haida Gwaii and the fog zone, but many people still want to "take their chances."

If someone is caught having a campfire, they will receive a $1,150 ticket, at minimum, but not just the person who starts the campfire will be issued the fine.

"Everyone around that fire is subject to a fine of $1,150," Stern said. "We're very familiar with the backwoods and there usually aren't very many places these people can hide."

Conservation officers have already handed out many tickets, he said.

"We just issued a ticket to an individual in Okanagan Falls for having a backyard burn," he said. "That individual was issued an $1,150 ticket under the Wildfire Act."

Due to the fire hazard, there will be zero tolerance for any open fire, and that also includes fires within municipalities, like "backyard" fires, according to Stern.

"Most people we have dealt with realize there is a fire ban," Stern said. "It's not acceptable for people to go out and think they can get away with it."

Violators could face fines ranging from $1,150 to $10,000 and a year in jail. If a campfire or other burning causes a wildfire, the person responsible may have to pay all costs associated with fighting the fire.

B.C. conservation officers are asking the public to report any fires they are aware of, here.