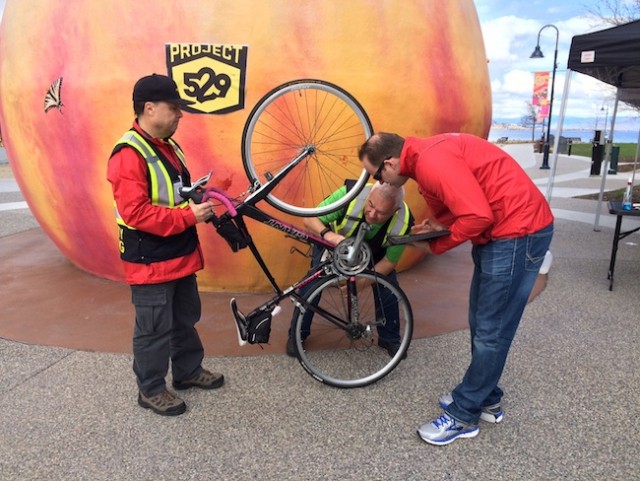 Penticton RCMP officers and volunteers shared information and registered bikes at the kick off for a new anti bike theft program Saturday in Penticton.

The officers and others were on hand for the launch of Project 529, at the community policing office next to the Peach on Lakeshore Drive.

"Anything we can do to curb bike theft and assist us in getting bikes back to their owners is a step in the right direction," said Cpl. Don Wrigglesworth.  "And the turnout is good with 50 plus people registered in the last two hours."

The program, which aims to end bike theft through the use of a mobile application and website service, is already in existence in other cities in the province.

It is needed here because of the steady increase in this type of theft in the city and outlying region, Wrigglesworth said

This crime is extremely frustrating for the victims, who have spent hard earned money on their bicycles, as well as the police who deal with bike thefts daily.

On Saturday, people were invited to register their bikes with the help of volunteers  and pick up a 529 shield, a tamper resistant decal with a unique code that lets thieves know that the bike is registered and aids law enforcement in recovery.

"We wanted to get our bikes registered because we've had theft around where we live," said Sabrina Crawford, there with her two daughters. "And I think it's a great idea.

My parents always did it with my bikes when I was younger, so I want to pass along to my kids when you get something new get it registered and it will be kept safe."

Resident Sandra Reeves said she thinks it's a good new program that will hopefully deter a lot of the thefts they've been hearing about in the community.

"I am a member of the PACA group and do a lot of cycling, so I want my bike to be safe," she said.

Representatives from the Bike Barn were also on hand to show people different lock options to secure their bikes.

"It's a team effort here," said Paul Lytle. "And we are putting it out to the public that there is a significant problem in our community. Hopefully with this program we see a reduction in bike theft through registration."

Wrigglesworth said following the launch, they will continue to promote the program in the community at places like the farmers' market, community events and the community policing office.

"It's a work in progress and the more people that register the more successful it will be," he said.