How well do you you know Syria? Most likely, not very well.

That deficit of familiarity is what Paul Crawford is trying to address with an art exhibit at the Penticton Art Gallery.

The exhibit showcases the art of 20 Syrians and follows the success of a similar exhibit last year, which showed Afghan art.

Crawford, the gallery’s curator, says he was frustrated with Canada’s wars in places like Syria and Afghanistan, and notes the vast array of opinions flying around in places like Internet forums.

“I found it fascinating that everybody seemed to have an opinion on what these countries were about and who the people were,” he said. “But if you really sort of ask them about it, nobody really knew much about it.”

That sparked the idea to reach out to the local arts community in Afghanistan last year, to curate an Afghan art exhibit.

“For me, working in the arts, I thought the best avenue would be to reach out to the arts community and have them sort of paint a picture of what the world looked like to them, from their perspective,” says Crawford.

Last year’s success, he says, was inspiration to reach out to the Syrian community to do a similar concept – and that’s when he found Humam Alsalim.

Alsalim became Crawford’s way into the Syrian art community – many of whom attended the fine arts program at Damascus University, which Crawford says is world-renowned.

There’s a sadness, Crawford says, to the art that has come in from Syria – perhaps a reflection of the condition of the country.

“I know a lot of people have come out of it and have just been overwhelmed by the sadness of seeing the work,” he said. “I think even in all that grief and sadness and everything else, I think there’s real beauty to be found as well.”

In particular, he points to an artist who paints patterns of disembodied limbs and body parts.

In Syria, Crawford says, there is a job for someone to collect all of the body parts that appear after a bombing, and sort them into piles – left hands with left hands, right feet with right feet.

The biggest pile is an indication of the amount of fatalities in that attack.

“This, in some small way, references that kind of brutality that does happen,” says Crawford.

He hopes the poignancy of the works, and getting to know the artists, will inspire some more empathy with the people in Syria, where images of destroyed buildings and atrocities just don’t resonate as much for the people in the comfort of their homes in Canada.

“Hopefully you’ll be a little more invested in digging a little deeper and finding out a little bit more what’s going on, or reaching out to that artist and making sure that they’re OK, and their family.”

Through the exhibits, he says he’s been more in tune with issues in the areas himself, through connections with the artists.

In particular, he recalls hearing from an Afghan artist in Kabul who was late shipping some art for last year’s exhibit.

“Before I’d even heard about it here, he’d written to me, ‘I’m sorry that I couldn’t get out to ship your work to you, today. There’s been a major attack in Kabul; they’ve shut down the whole city,’” he said. “And then, you know, you go online, and sure enough, there it is. And then a week or so later, you find it in the newspaper, here.”

While artists who had left Syria, often finding homes in Europe, had the convenience of FedEx, shipping art from Syria was challenging in itself.

Crawford recalls wiring $5,000 USD to Alsalim so he could pay for shipping artwork over to Canada.

Because of the war in Syria, Alsalim had to go to Lebanon to retrieve the money.

“And the last thing I heard from him after he got the money was, ‘Oh, it’s so great to get out of Syria for the first time in five years, I’m having the time of my life,’” says Crawford.

In the end, of course, the money went to its rightful purpose, and the art was eventually shipped to Crawford.

The exhibit will be on display in the Penticton Art Gallery until Sept. 11, and Crawford says all of the art in the exhibit is for sale.

He says it would be a shame to have gone to all of the effort to bring the artwork to Canada, only to ship it back to the artists.

Some interest has come in, and people have travelled from around B.C. and Washington state to see the art, but no art has been sold, yet.

Other art galleries have expressed some level of interest in the art, and Crawford said he would like to see the art take a bit of a tour through art galleries in Canada.

Still, he says he would love to see some of the art stay here in the Okanagan for the sake of some of the families who have come to the area from Syria in recent times.

Some of those families, he says, have seen the art, but he was away during their visit. However, another family is expected to visit the art gallery in the coming days, which he says is exciting, as he would like to see how the art resonates for Syrian refugees in the area. 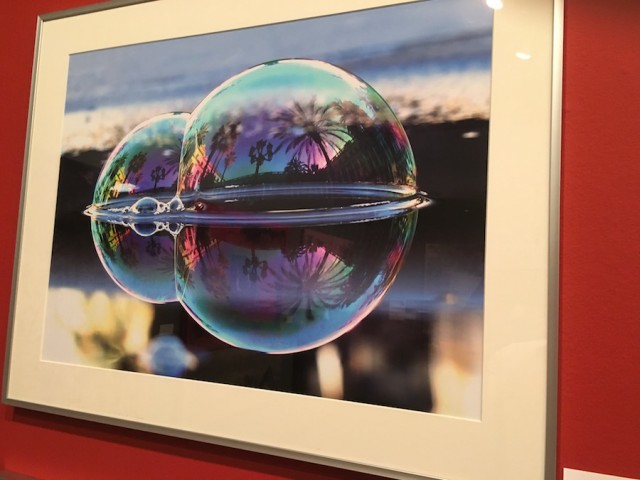