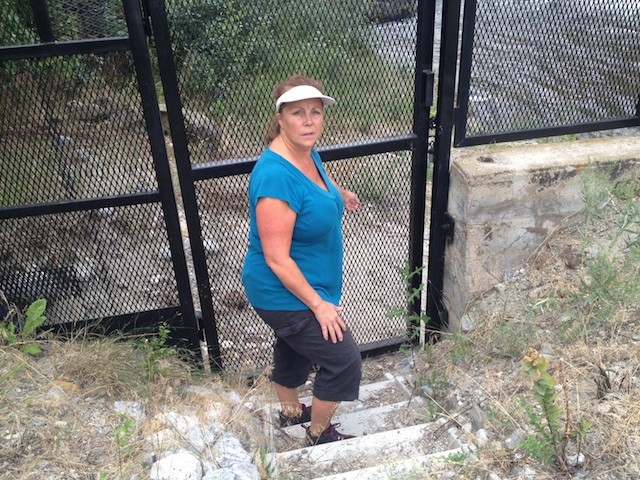 A longtime Okanagan Falls family is upset that people are trespassing on their property in order to fish in the Okanagan River.

Eleanor Vader-Walker, whose family has owned land east of the river next to the dam going back to the 1940s, says the problem stems from the Okanagan Nation Alliance not respecting their property boundaries.

"With the re-introduction of the salmon in recent years, when they first began having fish come up the river, people asked could they come through the property to fish on the river, and we said sure no problem, and they were pleasant to deal with and respectful," she said.  "And then all of a sudden there's many people climbing the fences, boosting little children over the fences."

"The worry is a liability if someone crosses our property and goes to the river and gets hurt, and then there is the issue of garbage left. We are also terrified of fire because it's all so dry."

Vader-Walker's daughter Melody Walker says the problem has been ongoing with the ONA believing they can legally walk along the river on the north side because it is Crown land.

But it is her belief the land has been incorrectly re-surveyed at the request of the government after the family refused the provincial government a statutory right of way.

"South of the dam and on the east side of the river is 100 per cent our private property," she said. "And the ministry are willfully enabling trespassing, endangering me, my mom, our pets and our property."

According to the Okanagan Nation Alliance, nation fisherman have begun to harvest along the river, as the sockeye is a food source for Syilx Peoples.

Penticton Indian Band Chief Jonathan Kruger, who has been fishing this week, said Walker is creating an obstruction, putting locks on gates that are not her property.

"This is our land and nobody is going to stop us from fishing," he said. "There are also safety issues. We have elderly people walking up that river because of her actions."

He added that he was proud of the men and women doing the fishing,  that it is very community based and a good atmosphere and that it was sad to have this situation here.

This is also the first run, he said, and they are anticipating a bigger run in August.

The band says its primary mandate is to ensure the conservation of the sockeye fishery.

For more than 15 years, the ONA has worked in collaboration with multiple organizations and agencies to bring sockeye salmon back to the Okanagan region. This band says the program has exceeded expectations, with hundreds of thousands of fish entering the Columbia River system every year for the past four years.

Walker said, however, that the family is standing their ground.

"We are currently paying our own surveyor to have this matter corrected," she said.