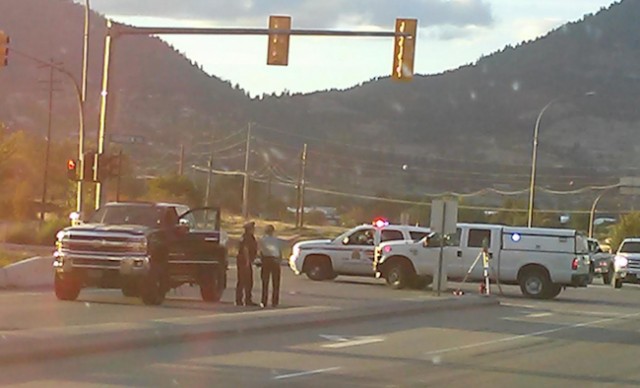 The accident that closed down a major Penticton intersection has turned fatal.

The four-year-old boy struck at the intersection of Fairview Road and Highway 97 has died from his injuries, says B.C. RCMP communications Sgt. Annie Linteau.

The child was struck by an off-duty police officer.

The Independent Investigation Office of British Columbia has been called in to investigate the incident, Linteau said in a press release issued late Tuesday.

"About 5 p.m., an RCMP officer traveling in his personal vehicle at the intersection of Fairview Road and Highway 97 in Penticton was involved in a collision with a pedestrian," the release stated.

The four-year-old boy was transported to hospital, where he succumbed to his injuries.

IIO BC has asserted jurisdiction, and anyone with information or who may have witnessed the incident is asked to contact the toll-free witness line at 1-855-446-8477 (TIPS).

While unconfirmed, Facebook comments are saying a boy about six years old was struck while crossing at a crosswalk in the Channel Parkway.

Reports say the young boy was with his father and brother when he was struck. They were on bicycles, but it is not known if they were walking their bikes through the crosswalk or riding them.

The extent of his injuries are not known, but a witness to the tragedy said someone was performing CPR on the child.

According to Drive BC, Highway 97 is closed both directions nine kilometres north of the junction with Highway 3A because of an accident. Detour is available via Duncan and Fairview.

Penticton RCMP are diverting traffic around Fairview Road and Highway 97.

Witnesses say the road is blocked by eight police cars and yellow police tape has been set up around the area.

Unconfirmed reports state two children's bikes were seen on the road near a black pick-up truck that is being inspected by police.