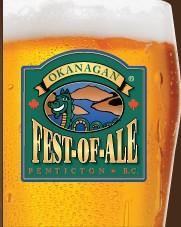 The Ogopogo logo, long synonymous with the Okanagan Fest-of-Ale, will be replaced in 2015.

Organizers of the popular Penticton event have announced the retirement of the iconic Okanagan Lake creature and are seeking a new face for the event.

"The logo has been around since the beginning, for 20 years," said Ginger Budinski, administrator/coordinator for Fest-of-Ale. "But it's time for a change, and we are looking for something that better reflects the craft beer industry."

It was after the last well-attended event that organizers started considering a new frontman, in large part because the Fest-of-Ale has grown into something that is more than just a party.

"It is really a showcase of great beer and the Ogopogo is no longer an appropriate face," said Budinski.

The new logo competition is titled "Farewell Ogo, Choose My Logo" and will run until Jan. 16.

One logo will be selected at the discretion of the Okanagan Fest-of-Ale Society Board of Directors, to be used for the ongoing promotion of the annual event.

Along with bragging rights, the creator of the chosen logo will receive two complimentary tickets per day to the 20th Annual Fest-of-Ale and $250 cash.

In addition, two complimentary one-day tickets to the event will be awarded for the following four years.

"It's a competition inviting anybody to submit a logo," said Budinski. "It's really open ended, so people can get crafty and creative."

The new logo will be released in conjunction with the 2015 event, set to take place in Penticton on April 10 and 11.