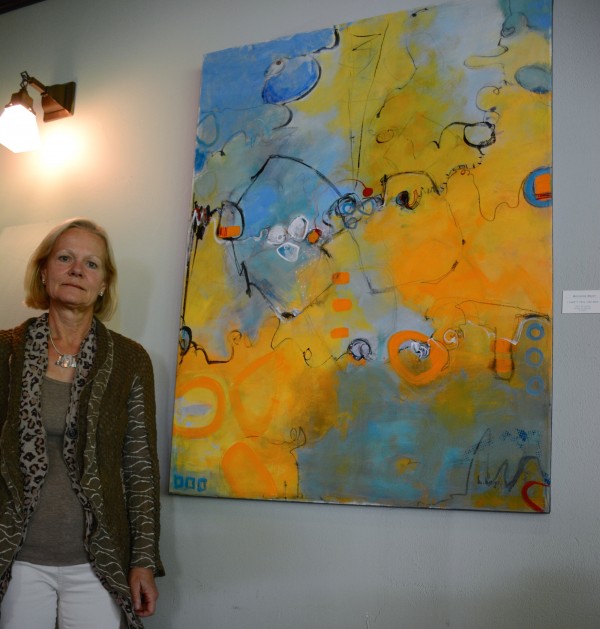 Photo: Bill Everitt
Marianne Meyer stands with her favourite painting titled I Can't Tell You Why. It is hanging in the Naramata Heritage Inn.

A painter's passion is being showcased on the world stage in New York in two weeks.

Marianne Meyer is a Swiss-born self taught painter, she has been living in Naramata for the past 15 years, she was surprised to get the invitation.

"I was amazed myself," Meyer said. "I never thought something like this would happen. Never ever."

The Agora Gallery in the Chelsea neighbourhood of Manhattan in New York will feature Meyer's original work in an exhibit titled Beyond Borders: an Exhibition of Fine Art from Canada. Meyer is one of 10 artists selected for the exhibit. In January the gallery sent her an email inviting her to the show.

"I thought, that's a scam, that's really a scam, there's so many scams you wouldn't believe," she said. "So I checked with the Better Business Bureau in New York and it got all good reviews. I still wasn't convinced it was real, so I phoned and asked if it was real and they said 'yes, it's real!'"

And the excitement has been building ever since.

"Since then, I get emails from other places in Chelsea, from Portugal, Italy - from everywhere."

Gearing up for the show, Meyer said she took her paintings off stretchers, rolled them and sent them off a couple of weeks ago. She said she can't wait to see them hang in New York.

"Actually my husband, my big supporter, he did it all for me," she said. "They sent me an email today showing the paintings back on stretchers and they're ready to show - they look good."

The humble Meyer gives most of the credit for her success to joining the Canadian Federation of Artists two years ago. Since then, she has periodically been featured in exhibits on Granville Island and was picked up full time by a gallery in a town near Zurich, Switzerland.

"She keeps me there (referring to the owner of the gallery). That was a big step for me, getting a gallery."

Meyer, who has been painting for 12 years, says her mother who "could paint anything" and two contemporary painters, American Nicholas Wilton and Gerhard Richter from Germany, inspired her.

After her mother passed, she felt compelled to express herself through paint.

"I taught myself - I have all these books, I watched videos. Then I started taking weekly classes. Then I had a mentor here, in Naramata and I worked with her then I switched to somebody else and every Monday I went and learned and learned."

"Now I paint almost everyday. It's all acrylic and lots of charcoal with some other mixed media like graphite or sand. I try lots of things."

She says she can't limit herself to just one painting at a time.

"I work and I have to let it dry, so I have usually three or four paintings going at a time. You have to be patient and sometimes I'm not. You can end up with a mess."

Looking to the future, Meyer's husband is turning the basement of their Naramata home a mini gallery which she hopes to open to the public by appointment.

"It looks good, I can hang quite a lot in there," she said. "You cant just keep them all at home, they have to go out and people have to see them."

The exhibition opens on October 10, and continues until October 30. The opening reception takes place on the evening of October 16, from 6 p.m. to 8 p.m.

Entrance is free and all are warmly welcomed to attend.