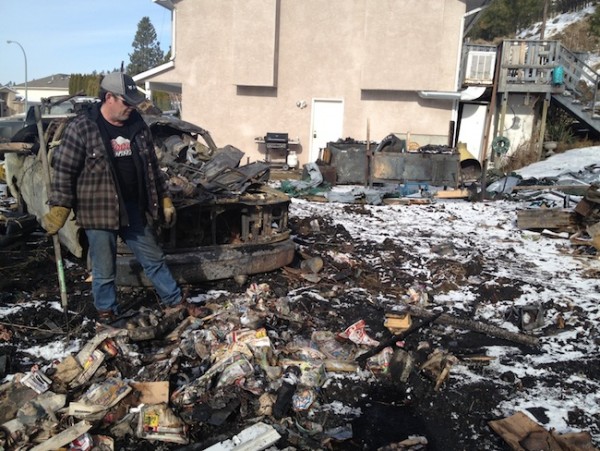 Photo: Deborah Pfeiffer
A friend goes through the rubble after the fire

A garage and a Ford pick-up truck were destroyed in a fire Monday morning in Penticton.

The fire started around 10 a.m. in the outbuilding next to a home at 1656 Holden Road.

"There was like this cyclone of fire heading straight for my house," said homeowner Barry Wyles. "I've never seen anything like it."

Wyles said he was heating up the garage with an outdoor wood stove, when he went inside for a bit.

Around 15 to 20 minutes later he smelled smoke and by then, he said, it was too late.

In addition to the 1994 pick up truck, which belonged to a friend, he lost a brand new tool box, remote control cars, and several other tools he uses for his job.

Wyles said he doesn't have insurance.

The fire did not spread to the house, and fortunately, he and his son, who was in the house at the time, were not injured.

"Everyone was OK, including the cat," he said. "We've had a few good laughs, what else can you do."