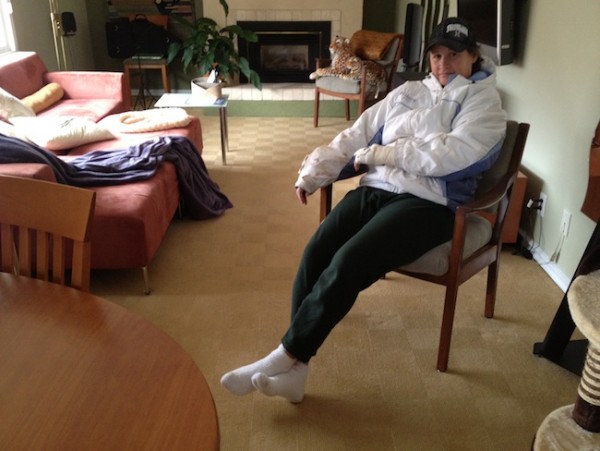 A Summerland woman was recovering Thursday, after being attacked by what are believed to be three coyotes, while walking on a popular trail Wednesday morning.

Sarah James was walking a friend's dog Rosie on the Summerland Centennial Trail when the three animals, a large one and two smaller ones, surrounded her.

Believing the small labradoodle to be in great danger, she immediately covered her with her body.

"My primary focus was Rosie, absolutely, unconditionally," she said. "I went into survival mode for her."

James said she first noticed the three animals when she was walking a larger dog, a labrador retreiver cross, earlier in the morning at the bird sanctuary off of Peach Orchard Road.

As they started to approach she yelled and they took off.

At around 10:30 a.m., she started a second walk with Rosie on the trail that runs parallel to Peach Orchard.

She was letting the dog run free and calling her back for treats, when the coyotes came out and surrounded her.

Two came from the side and one from behind. 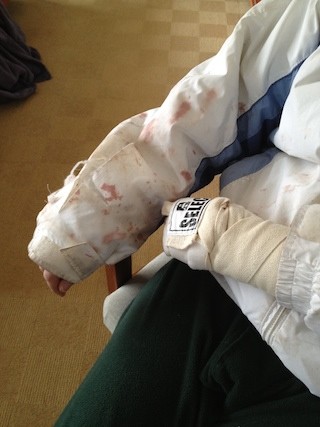 She undid her ski jacket and  dove on top of the dog, covered her with her right hand and with her left hand swatted them away.

"Rosie was crying up a storm and the whole thing lasted about two to three minutes, although it felt like it lasted way longer," she said. "Then it went quiet, and they went away to the north side of the creek."

James waited about 30 seconds, comforting the small shaking dog, before picking her up and running down the trail.

As she ran down she ran into a man walking and warned him about the coyotes.

She also contacted her partner who let a friend who lives nearby know about the incident.

That friend, Manfred Wobst, ran up the trail to get James and Rosie.

"I just tore up there," said Wobst. "There was a man helping her already, and I saw Sarah had lots of defensive wounds on her hands and that her coat was ripped."

The dog's owners came and collected Rosie, who according to James was uninjured in the attack, while she recovered at Wobst's home.

Wobst said there is typically a lot of wildlife in the area. What is worrying to him is the coyotes went after a person.

"The fact that they attacked Sarah is the scary part," he said.

Sgt. Stephane Lacroix with the Summerland RCMP said a police report was filed on the incident. In the report it states, James sustained major scrapes and her coat was torn to shreds, but she did not require any treatment or ambulance at the scene.

He said additional patrols were made during the day and they then contacted a conservation officer.

"We were advised by the conservation officer there is an increased problem with coyotes in the Summerland area and the officer has a plan in place to deal with coyote issues," he said.

The conservation officer was not available to comment on Thursday, but James said a culling of the animals was planned because there are several dens in the area, and the animals don't have any natural predators.

The fact the animals are exhibiting pack behaviour is the danger, she added.

James, who  had her left hand wrapped by a doctor and was on antibiotics on Thursday, said as a vegetarian and animal activist the culling is upsetting to her.

"We have blocked off their access in this area, so they are removed from the food chain," she said. "They are emaciated and sick and they then go for dogs, cats and children, anything small."

Still she realizes if the coyotes had gotten Rosie, they would have likely turned on her next.

"I have a huge amount of compassion for the coyotes as well, so I do feel badly about the cull," she said. "At the same time people in this area need to feel safe."

Click here to see our map of other recent attacks.