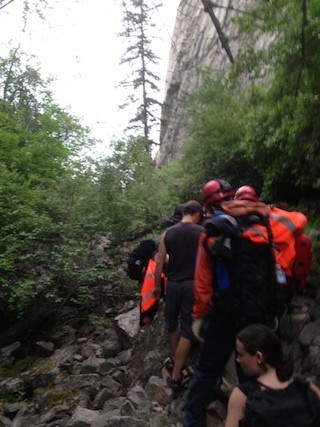 Photo: Contributed - Penticton & District Search and Rescue
PENSAR and volunteer climbers work together to get to the injured climber

At 6:15 p.m. Penticton & District Search and Rescue received a call from the British Columbia Ambulance Service requesting PENSAR’s help to extricate a woman from the Skaha Bluffs Shady Valley area.

“The victim was in the Red Tail climbing zone when she suffered a climbing incident and was suffering from undetermined injuries,” explained Public Affairs and Community Liaison Officer Randy Brown.

SAR Manager Richard Terry and 14 SAR Technicians responded to the page with 12 personnel headed straight to the park while two others went to the airport to ready the Eclipse Helicopter for a long line extraction.

Brown says while the Helicopter Long Line extraction team (HETS) team was preparing the helicopter, a six- member ground team was getting ready to hike into the injured hiker.

What happened next was a nice surprise and an integral part of the rescue. 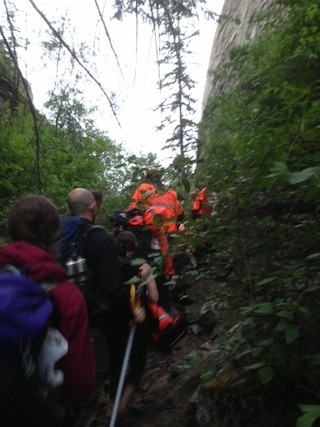 Photo: Contributed - Penticton & District Search and Rescue
PENSAR and volunteer climbers work together to get to the injured climber

“They were met with immediate assistance from a dozen fellow climbing enthusiasts who offered to help the team carry medical packs, equipment and a stretcher over a difficult and at times dangerous path to the injury site. These convergent volunteers became an essential part of the rescue effort,” said Brown.

As the climbing team of SAR and volunteers made it to the area, the helicopter team had arrived and lowered a HETS technician to the ground where he commenced First Aid and began to prepare the injured climber for rescue.

By 8:00 p.m. the victim was secure in a stretcher, with a HETS technician by her side and was whisked up and out the valley and flown to the Skaha Bluffs parking lot where she was transferred to a waiting BC Ambulance.

“SAR manager Richard Terry recognized after speaking to all team members, that this task was a difficult one – however it was made easier due to the assistance of the fellow climbing enthusiasts who assisted the rescuers,” added Brown.

The 43-year-old woman is currently being treated in the Penticton Regional Hospital.