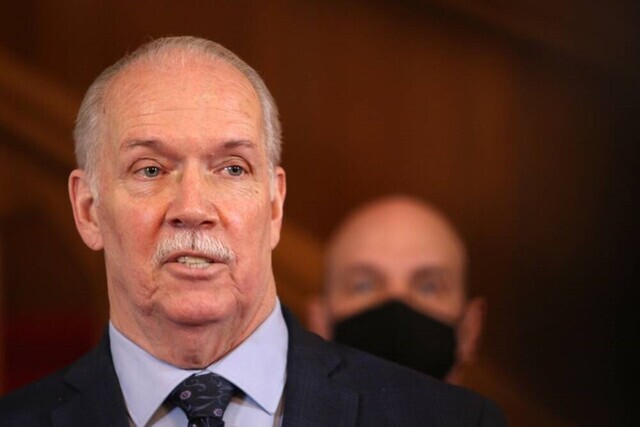 Photo: Times Colonist
B.C. Premier John Horgan has announced he will step down once a new NDP leader is chosen in the fall.

There are three ways to discuss this.

3. As premier, John Horgan has business to finish off.

There are three ways to describe the economic record.

1. The Horgan term can be described as not fixing what wasn’t broken.

2. The Horgan term can be described as trying but not succeeding to fix what wasn’t broken.

3. The Horgan term can be described as not quite breaking what didn’t need to be fixed.

There was, for example, the appeasement of the base of organized labour support. This has taken two shapes: the proposed elimination of the secret ballot when workers vote in favour or against forming a union (if more than 55 per cent sign union cards), and the narrowing of the labour supply to unionized trades only on infrastructure projects. One is democratically terrible, the other is fiscally so, but neither bad look was a concern in Horgan’s five years.

There was, for example, the appeasement of environmentalists with a forestry policy that offended Indigenous leaders and moved investment critical to employment in the sector to Alberta, the United States, even Sweden. On this file, in particular, the haste with which the policy was hatched and rushed through the legislature revealed much about the government’s true indifference to consultation and ineptitude on the larger parts of the province’s economic portfolio.

There was also, for example, the appeasement of the base that wanted a redistribution of wealth. Early on there was a shift to businesses of the burden of Medical Service Plan (MSP) premiums to an Employer Health Tax, the imposition of a batch of homeowner and homebuyer taxes and an increase in provincial income taxes in the upper third of the brackets. These were done under the guise of channelling funds into a stronger housing supply for the neediest, an easing of taxes on employees and a stronger hand into the pockets of those making more. When the pandemic hit, all but one of the proposed taxes in the 2020 budget were delayed – the exception being the additional surcharge at the top tax bracket. That was a clear signal that the government believed there was more to take from those who had found more to earn.

But these measures did nothing to improve the economy and missed the larger point of a health-care system revealed by the pandemic as laden with deficiencies and inefficiencies and a housing market that cannot be wrestled into affordability any longer, no matter the depth of taxpayer dollars.

As optics, though, under a premier with a publicly bonny disposition, these measures served to placate and even enlarge the base, no matter they were distractions from the more profound challenges that Horgan will leave to the next person.

The largest optical illusion, of course, was this year’s StrongerBC plan. This was the Horgan government’s most instrumental illustration of its vision for the economy: inclusive and clean growth, terms no one would find problematic. But in Indigenous etymology, it was big hat and no cattle. It set course for an economy without setting aside money to guide it. Apart from an announcement-day construction project – days before a provincial budget, where one would have expected an explosion of detailed spending plans – nothing constructive has come from it months later. Dust is settling upon its documentation as we speak.

The business community sentiment that greeted John Horgan to the job has not changed. The province is uncompetitive from a taxation standpoint and by no means a paragon of effective spending. If it is true that his administration did not take down the economy, it also cannot be said it has contributed to its growth. This is hardly the stuff of legend, yet Horgan must be identified as the first NDP premier to leave the role without an accompanying scandal.

The election campaign effectively started last week with Horgan’s announcement he is retiring as leader in the fall when the party chooses a new leader. In his gentle nudging of his party toward a more electable centrist position on some issues – energy development, for one – his successor will face the pressure to carry on that work to consolidate power.

Trouble is, like all party leadership contests, the races are rarely about moderation and conciliation. They’re typically rife with rhetoric and riddled with low-sense policy ideas that serve as red meat for the party stalwarts.

But by the fall we will know if a recession is in the making, if inflation has mauled the household budget and if higher interest rates are dampening the housing market and damning those in it. It is unlikely any of Horgan’s wannabe successors will focus much on that; economic stewardship has never been an NDP skillset, mainly because its leadership never draws from those environs.

What Horgan inherited from the previous administration was not squandered, per se, but the opportunity that existed with low-cost borrowing to lower taxes to generate growth has now passed. The next premier of British Columbia will not have John Horgan’s luck of the Irish. •