Opinion: Why B.C.'s premier and Surrey's mayor should step down now 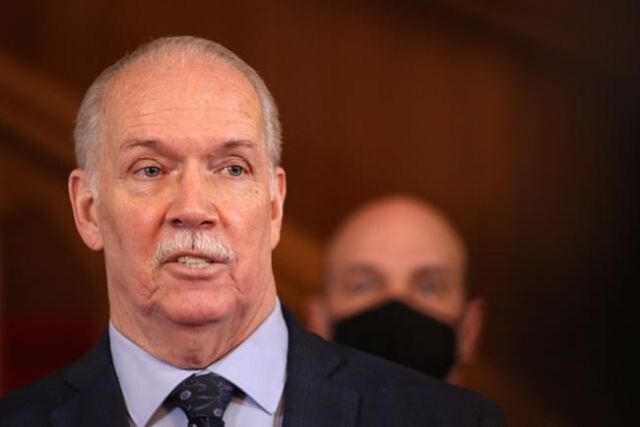 From the heart in one case, from the head in another, I implore (Premier) John Horgan and (Surrey Mayor) Doug McCallum to step aside.

The two significant political leaders are at critical career junctures. For vastly different reasons, they would be wisest to leave their posts.

First, the plead from the heart concerning the premier. For weeks now it has been speculated that Horgan will sometime this summer disclose he will resign his role.

That suffering surely calls upon him to find solace in his family and friends and the respect of a province and country that needs to understand that the toll of public dedication ought to be paid back with a hearty period of personal savouring.

There are practical purposes, too, that build a better biography. It is said, rather snidely, that 80 per cent of life is showing up. But in politics and business, it is more like 80 per cent is knowing when to depart.

Horgan has nothing particularly significant to prove. He nurtured and resuscitated the B.C. NDP, didn’t run the economy off the side of a cliff as many expected, generally kept the public trust during the roller-coaster ride of the pandemic and can leave now as the dean of the premiers while his stock is relatively high. It likely isn’t going to get better and may soon worsen.

Someone also reminded me of how Bill Bennett left after it was apparent that Expo 86 had been not just a ringing image success but a decent financial one. He went on his own terms, no push or shove, and left the audience wanting more.

This is how Horgan could and should go. So from the heart, premier, take your leave to smell the roses and no one will fault the rationale.

Someone else reminded me of Gordon Campbell’s and Brian Mulroney’s travails that offered earlier exits not taken. This is a somewhat similar version of the story of McCallum, the Surrey mayor up to his eyeballs in the shoo. His predicament is a hot, steaming mess.

When you complain, it often pays to look down the road and understand your privilege. What is the point, after all, of belittling and mourning Vancouver’s politics, when the citizens of Surrey have such dysfunction on their hands?

The city with so much happening and such a bright future – the city that before long will be our province’s largest and ought to be driven by vision – is facing a hapless time ahead if it cannot effect regime change this October.

McCallum has gone from a sturdy, stalwart mayor in a first realm of three terms 1996 to 2005 to a caricature of the crazy uncle at the family dinner in his return to public life in 2018. With it he has taken the politics of a proud city into profound calamity.

Since his return, McCallum has wisely in some cases stirred the pot to shake the elements and in other instances created havoc with lasting chaos. Take your pick of the two largest ventures, whether a hasty reworking of transit expansion with minor disruption, or the ill-prepared gargantuan task of replacing the RCMP detachment with a local force.

His feeble economic justification of each move and the extraordinary divisiveness of the latter might have been enough to contribute to his downfall, but McCallum has also self-inflicted a political wound that would be comical if it weren’t so deadly serious.

The truth on this matter will take some time still to be court-verified, but what we do know is that last September the mayor engaged in a verbal spat outside a Save-on-Foods with someone advocating the RCMP’s local retention.

The stories on what followed significantly diverge from that point on. McCallum said someone then ran over his foot in the parking lot, and while that made for a momentary splash deserving of empathy, the unravelling of the tale is anything but.

The running shoe has been forensically examined and the video from the supermarket reviewed. Let’s not rush to judgment but say the authorities have laid a charge of public mischief – not on the parking lot driver, but on the insistent mayor, whose trial convenes after the Oct. 15 election.

Until last week, McCallum felt fine continuing to chair the Surrey Police Board. Common sense gradually dawned, and he has relinquished that clear conflict.

And while there is predictable froth and hysteria in the public cries for his pre-election departure, McCallum’s hold on the office has the feel of an antediluvian Charlton Heston clutching the NRA’s symbolic rifle, vowing it would only be wrested from his cold, dead hands.

The main difference is that McCallum continues regularly to offer surprisingly fascinating entertainment.

For instance, last Monday’s council meeting was shorter than the Beatles’ Hey Jude, heckled into adjournment after seven minutes by catcalls for him to resign. The mayor has had to regularly silence the council audience. Wednesday’s annual state of the city speech had to be presented with more visible security than a presidential visit. Irony of all ironies, the Mounties were the protective guard.

Horgan’s government, curiously enough, is proposing changes to the Local Government Act and the Community Charter that would require mayors to take leaves of absence when charges are laid against them. This would turn down the temperature. In McCallum’s case, though, it would not be retroactive, so the heat is on.

For the time being he is propped tentatively by his enfeebled party, the Safe Surrey Coalition, which begs the question: What would be the Dangerous Coalition? The ethical gesture would be to step aside, beg for a quick court resolution to see if he can clear his name, then campaign if he thinks public trust in him hasn’t been irreparably wounded.

Somehow, though, I have more confidence in the self-understanding and acumen of the premier among the two.