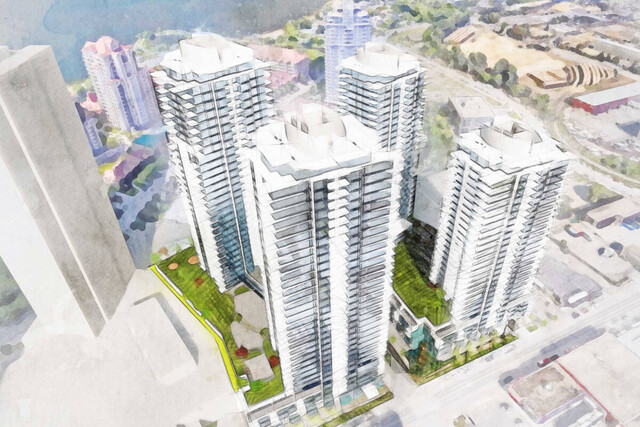 Photo: Contributed
A Vancouver-based developer plans to build four high-rises at Elis Street and Industrial Avenue Kelowna.They would be 28, 32, 34 and 36 storeys tall.

The current narrative around urban living is that cities are shrinking as pandemic-related influences such as remote work and the desire for additional space led many Canadians to flee major cities in favour of suburban or rural communities.

However, recent census data has shown that the story of urban exodus is somewhat exaggerated and major urban centres are actually growing.

Statistics Canada defines downtown centres as the core of an urban centre with 100,000 people or more. Canada also welcomed the most immigrants in a single year in history in 2021, reaching its target of 401,000 new permanent residents.

As pandemic restrictions start to lift and borders begin to reopen, Canada is expected to receive an additional influx of immigration and will continue to fulfil its goal of adding 2,000,000 new permanent residents to the country’s population in the coming four years, further fuelling the growth of major urban centres.

Increasing urban population growth means cities will need to grapple with greater density. For example, census data found that Vancouver was the country’s most densely populated downtown, and Metro Vancouver planners project the region will welcome more than one million additional residents by 2050.

This presents both challenges and opportunities that developers will need to address when it comes to future housing needs, making now the time for developers to start planning innovative housing projects that will lean towards future urban population growth.

Denser downtown cores mean we will need to fit more people into the same amount of space.

We saw the devastating effects of climate change in B.C. over the last year with unprecedented heat waves and floods, making it more important than ever for developers and city planners to start designing and developing more energy efficient and sustainable homes. This means investing in projects that both maximize square footage and help fight climate change, including taller towers that are net zero, and follow energy step code or Passivhaus design principles.

It is also important for developers to consider the effects increasing density and pollution will have on urban residents and when designing towers to address population growth. Looking at cities such as Hong Kong and New York that already have high urban density, developers are incorporating features such as enhanced air filtration into buildings to help mitigate these effects and improve the quality of life for residents.

The wants and needs of homebuyers have evolved as the pandemic reinforces the importance of health, community and wellness.

The perception of luxury is changing: in addition to marble countertops and stylish finishings, homebuyers are looking for community-based amenities that enhance their well being and foster connection with their neighbours.

While homebuyers long for fresh air and outdoor space, satellite images have shown that green space is decreasing across major cities in Canada as a result of urbanization. Developers can address this by incorporating amenity spaces within buildings that mimic being in nature.

We are already starting to see this in Toronto, with 123 Portland’s rooftop outdoor fitness space and communal cooking zone and in B.C., with One Park, a new project in downtown Richmond that will include a 31,000-square-foot private park for residents. One Park is half the size of a soccer field, filled with walking paths, a playground and a large outdoor fountain, providing residents with access to green space within their residence.

We are also starting to see bigger and bolder energy-efficient towers that follow Passivhaus design principles in the works. Once completed, they are poised to usher in a new era of healthier, more sustainable living.

As cities become denser, outdoor-inspired community-based amenity spaces and buildings that positively contribute to both our health and the Earth are expected to be high drivers of demand.

As Canada’s population continues to grow, now is the time for developers to start planning buildings that will address the demands of increasing urbanization and ensure a high quality of life for residents of high-density neighbourhoods.

Jacky Chan is the president of BakerWest Real Estate Inc. in Vancouver.