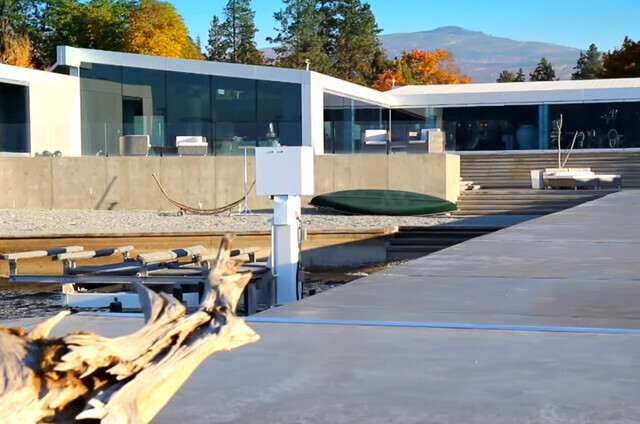 Photo: Contributed
The" Rock House" at 4358 Hobson Road in Kelowna was appraised at just over $14 million earlier this year.

In 2021, Kelowna earned the accolade of being named the second most livable place in all of Canada.

For those who live in the Okanagan, or have visited the area, they didn't need a report or survey to inform them about how great it is. (Three of the top five most livable places in the country were in B.C.) But the report indicated that the rest of the country—and likely the world—is about to get that message too.

Many are now in the process of adapting their lifestyles as they move into year three of the COVID-19 pandemic. They are rethinking how and where they work, as well as where they can, or should, live.

Opportunities to make radical changes to our lives abound, and the winds of change are blowing more people, more desire and more money towards Kelowna and the Okanagan lifestyle — especially in the luxury market, which fits hand in glove with the many local attributes—spacious rural properties, lakeside estates, breathtaking ski chalets and beautiful hillside vineyards.

Here are five reasons Kelowna's luxury real estate market is set to boom in the next five years.

The “new normal” is pushing Canadians out of our largest cities

That’s all made possible, for many, by our wide-scale adoption of remote work in the creative, digital and white-collar professions. There are more opportunities for more of us to live anywhere while holding on to our big city careers and paycheques.

Kelowna has been a prime recipient of people making such a change. They’re bringing their business ideas and their financial leverage to the Okanagan Valley.

Part of this recipe is the urge to have more breathing room, green space and to escape the hustle and bustle of the big city. Luxury real estate in Kelowna still carries great value when compared to luxury in the Lower Mainland or the Greater Toronto Area (GTA) and coastal U.S. centres.

Kelowna is already one of our fastest growing cities

Kelowna is one of Canada’s fastest growing cities, and we expect that’s a trend that will continue and potentially accelerate. Part of the equation is that Canada is now on a bold path to increase our number of immigrants and welcome more than 1.2 million new Canadians over the next couple of years.

Despite the pandemic, the government is on track and hopes to welcome 411,000 new immigrants by the end of this year after setting a record last year. History and demographics tell us that most of these people will settle in GTA and Metro Vancouver, but that will have a cascading effect on smaller cities, including Kelowna.

This has been true for a long time, but it’s a shift that is solidifying. Kelowna is not just a farming and orchard community anymore, nor is the valley overly dependent on summer tourism to keep the region growing and succeeding.

Kelowna is enjoying an expanding tech industry, maturing winery and cuisine culture and is experiencing a downtown renaissance in which the lakeside urban core is regaining its economic, cultural and entertainment centre of gravity and is growing up.

Not only is Downtown Kelowna becoming the key economic hub in the valley, but it’s also becoming one of the most important centres in Western Canada, along with Vancouver, Calgary and Edmonton.

Kelowna and the Okanagan Valley have always, and will always, have some of the world’s most beautiful, peaceful and attainable lakefront properties, picturesque and functional farms and ranches, and productive and seductive vineyards and wineries.

The country and the world continue to learn this. Four properties in Kelowna and two Lake Country were recently included on a list of B.C.'s most pricey properties, stemming from B.C. Assessment's valuation disclosure in early January.

A $14 million Kelowna home is the most expensive single-family residence in the Okanagan and 296th on the provincial list.

No matter what kind of real estate you’re in the market for, access to world class education is important to everyone. Here in the Okanagan, the UBCO is gaining ground as one of the best universities in the country, and it still has plenty of potential.

It provides a small but expanding institution with two campuses, including the recently announced downtown Kelowna campus.

Taken together, these factors and others reveal a path of exceptional growth for Kelowna’s luxury market in the next half-decade and beyond.

Faith Wilson is the founder and president of faithwilson | Christie’s International Real Estate in Vancouver. The company recently opened an office in Kelowna.