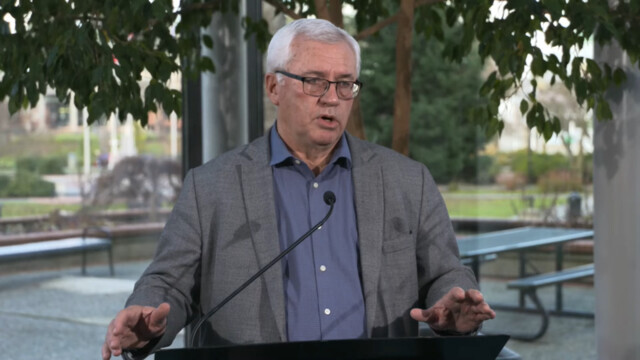 The phone rings at 7:30. Feels early, but Henry Braun has been up since 2.

Three weeks into a touch-and-go natural disaster, the mayor of Abbotsford this morning has calm in his voice – even more composure than has been his hallmark reassurance, his distinctive clarity attracting national acclaim ever since the skies emptied, the waters rose and his city was endangered.

The waters were at last receding. The measures taken further mitigate what was horrible but posed even more profound threat. “No fatalities,” he notes.

For 68 of his 71 years, Braun has lived in a community that became a city we nearly lost under record rainfall in November – 540 millimetres, close to two feet – and the adjacent surges. It will take many months to regroup, many years for a fuller recovery, and only time will tell if the many lessons of the massive floods will be abided.

From a distance, the carriage of this ranching businessman-cum-public official has offered a seminar in leadership crisis management with so many principles to study it is difficult to know where to start.

For one, he has a disarming immediate candour, a man of Mennonite faith imbued with humility and belief and no small vulnerability.

“Someone once told me not to let your head get too big or it will float away.”

That openness doesn’t take long to surface in conversation. Sure, he can stand tall each day at news conferences to talk about the fight against nature’s wrath, but his voice quavers when he recalls getting out of the shower one morning early in the siege, dropping to his knees in prayer, and pleading, “Lord, I don’t know what to do.”

He has built his credibility by understanding the contours of Abbotsford inside out, just as he did in starting at the bottom “as the boss’ kid” earning no automatic advantage in his father’s business, told he would learn as he moved up whether it would be for him – a business (Pacific Northern Railway Corp.) he would later run, expand and eventually sell and return to his purebred Herefords on the farm.

In office, even before it, he spent a lot of time learning about the city’s infrastructure. His geekish curiosity proved prescient. He was no stranger to the Barrowtown pump station, the only way to drain the Sumas Prairie into the Fraser River, when floods threatened it in recent weeks. He didn’t have to be told the station had to be reinforced – volunteers and the Armed Forces descended – or all would be lost.

He understands the value of relationships, a political conservative who years ago as a city councillor spotted John Horgan sitting in a corner at a conference and decided to befriend someone he thought might be going places. What he paid forward has paid back.

“You have to build trust in your relationships in good times so people are there when you need them.”

He has long known, well before he sought office, that one’s responsibilities extend to supporting a community. When the mayor called, he’d join a task force or help with a study or furnish insight.

He peppers his explanations of his tasks with ceaseless credit to others administering the city’s $260 million budget. I tell him that his praise of his city manager, Peter Sparanese, might provoke a request for a raise. He says he’ll leave that inference to me to write about or not, but gently notes that his team isn’t there for the money but for the opportunity to serve.

“I have learned to appreciate that in people.”

And the two-term mayor who insists he was never a natural communicator – “I almost didn’t run as a councillor because I knew I was going to have to be a public speaker” – is now a virtuoso in the craft. He understands the value of getting out ahead of an issue with his community and his staff, “to be honest with them,” recognizing reasonably that there is such a thing as too much information. “I could go on for hours.”

Like most any leader, there is what Braun describes as an earlier “dark side” backstory of power and position consuming the persona. He can point to an epiphany in September 1988, and the new man who emerged “had to go back and apologize” to many whose friendships he’d risked.

Like most any leader, too, he glories his life partner, Velma, their 50th anniversary only in April, with a line heard often and in this instance meant clearly: “If it wasn’t for her, I couldn’t do this.” He has lost 11 pounds in 19 days, but she told him he could use losing 20. That’s what partners are for: to hear about the day’s curveball, talk about what can be done and not be taken too seriously.

There are few diversions to the disciplined life: Wheel of Fortune and Jeopardy weeknights to get away from the news for a bit, Tim McGraw’s Be Humble and Be Kind and Rosemary Siemens’ Closer to Thee My God to play when the moment requires, then back again of course to Scripture and its solace.

His discipline now delivers him to the next purpose of reclamation and rebuilding.

“We have the best soils in Canada,” he says, but speaks sorrowfully of the social and economic setback these floods will impose.

The blueberry farms, in particular, will be four or five years from producing, so it will be the task of governments to have the backs of their citizens – and, for that matter, of Abbotsford writ large, which will lack the tax base to pay for anything approaching the 10-figure damage. It will also be time, at last, to spend on infrastructure. The flood threat was no secret or surprise.

“We have understood this for 30 years.”

He has not decided whether to run again next fall. He will give it until April or May. He is sanguine about his rock, er, country star status; in politics, the knives always come out, so there is no need to unsheathe them early. Meantime, in chaos that would buckle many leaders, Braun feels upheld by a “peace that surpasses all understanding.”