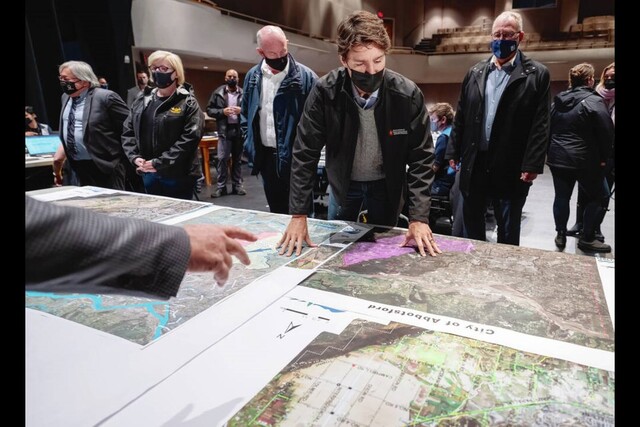 Photo: The Canadian Press
Prime Minister Justin Trudeau looks over maps as he surveys the damage left behind from the flood waters in Abbotsford, B.C., Friday, November 26, 2021.

Natural disasters can be disastrous for politicians.

Secretary of State Condoleeza Rice was scorned for shoe-shopping in New York as Hurricane Katrina hammered New Orleans in 2005. George Bush cemented a reputation for doziness by being slow to react to the same crisis.

In 2017, an indifferent Donald Trump tossed paper towels to a crowd during a belated, five-hour trip to hurricane-­devastated Puerto Rico. Even for him, it was a bad look.

In 1997, with a federal election call looming, a picture of Prime Minister Jean Chrétien tossing a single sandbag to volunteers in flooded Manitoba was condemned as pre-campaign optics.

Likewise, when a tired, soot-covered B.C. wildfire team was dragged out for a staged photo op with Stephen Harper in 2015 — another election year — the prime minister was accused of political grandstanding. An online news site ran the disparaging headline “Man in blue suit thanks firefighters” over a picture that put an in-focus member of the fire crew in the centre of the frame and a blurry Harper on the periphery.

It’s a case of damned if you do, damned if you don’t. If you show up at the scene of the catastrophe you’re a spotlight-hogging opportunist, but if you stay away you’re tone deaf and uncaring.

Trudeau showed up Friday, first in flooded Abbotsford and then in Victoria for a ­meeting with John Horgan (with ­protesters drumming and chanting under the windows of the premier’s office). Was there value in the flooded-farm tour in the Fraser Valley? Yes, said a couple of Victoria-area cabinet ministers.

“I don’t think you can understand the difficulties that these farmers are facing without really speaking to them,” said Agriculture Minister Lana Popham. “I think that his visit will give farmers confidence that the federal government understands the needs that we’ll have and the ask that we’ll be putting forward.”

And there’s the key. It’s not just about showing up, it’s about showing up and acting. Boots-on-the-ground visits ­matter when are they backed by actual help. On Nov. 17, Ottawa agreed to B.C.’s request for assistance with storm damage. Military efforts have included ­working on dikes at ­Abbotsford and ­flying in water, food and ­essentials to cut-off areas, ­Fleming said. The feds are helping clear the backlog at the port of ­Vancouver by adding container storage capacity at industrial land in Richmond.

The big question, though, is what financial assistance will come. “The monetary need will be the precise figure of a lot,” Fleming answered when asked how much that will be.

Horgan said later that it would be “premature” to ask for a specific amount. When asked what Ottawa would contribute, Trudeau said: “We will be here for whatever is needed.” (Remember that one.)

The most concrete step Friday was the formation of a joint provincial-federal committee headed by B.C.’s Mike Farnworth and Ottawa’s Bill Blair.

Despite the pre-emptive closing of three mainland highways today in nervous anticipation of more heavy rain over the next few days, Fleming sounded relatively reassuring while talking about getting B.C. back on its feet. Fuel barges are landing at Nanaimo. The Malahat might be pokey, but they got it open, in both directions, faster than expected. The tone was all about slow, difficult but steady progress.

But lurking in the background was the unanswered question of what will come next and how much ability we’ll have to deal with it. After this crisis is over, what about the next one, and the one after that? In Ottawa, this week’s throne speech spoke of a strategy to adapt to the effects of climate change. Fleming talked along those lines, too: “Our infrastructure will be rebuilt to withstand the new climate realities that we find ourselves in.” Trudeau also weighed in, saying it’s important to build not for the world that existed 20 years ago, but the one that will exist 20 years from now. That’s all great, but it still feels like we have entered a new conflict unprepared, fighting Second World War tanks with First World War rifles and bayonets.

Better get used to it, though. Both Horgan and Trudeau mentioned Merritt, parched by drought in May, choked by wildfire smoke in the summer, then flooded out in November. “This is becoming the new normal,” Trudeau said.

Given the increasing frequency of natural disasters, there’ll be plenty of opportunities for leaders to put a foot right, or wrong.

Jack Knox is a columnist for the Victoria Times Colonist