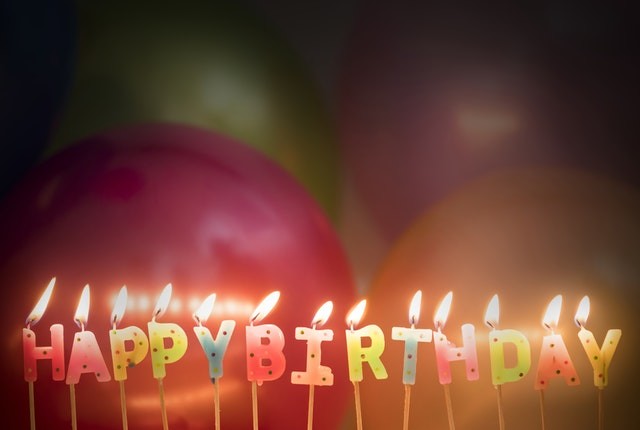 My kids were unusually happy about celebrating my 46th birthday.

The delicious, frosted side of me said, “Well, they just want to eat at a restaurant and gorge themselves on birthday cake.”

But the nutritious, whole-wheat side of me quickly realized just how damn amazing kids can be (when they’re not melting down).

At Christmastime they decided wrapping presents was nearly as much fun as opening them, and that continued last week when my big day came and went.

La-La was bouncing three days before it all happened. She asked me four times what my favourite colour is so she could find the perfect gift bag.

Middle-baby Betty busily crafted me little pictures and cards, colouring and drawing until it was just right. Littlest Emmy followed me around more doe-eyed than normal.

It really was an incredible feeling.

They practically forced me to sleep in, even though it was a school day and I needed to help make them school lunches.

But when I finally crawled from bed, my wife Erin had French toast on the table and the kids’ lunches neatly packed.

There was a small stack of gifts on the table, too. Momentos from Ottawa, a city where I lived for a decade and where my parents and two brothers still call home, were packed inside those carefully selected gift bags.

My wife had spent the previous week working in my former home and returned with Ottawa Senators gear, which is really cheap these days.

It was all too much for a guy who’d rather not celebrate his birthday, but it was also perfect.

If you can’t enjoy birthday love from your family, what can you enjoy?

It’s probably okay to celebrate turning 46, too. Really, this is midlife for me. I'm halfway there!

While I fantasize about living to 119, that’s probably not in my cards with prostate cancer on one side and two pre-60 heart attacks on the other. On your father’s side, indeed.

Let’s hope to goodness I have more of my grandmother’s genes. The woman barely set foot inside a hospital before she died at 94.

That gives me 48 more years on the high side.

It’s not fun to think about mortality, at least not for me, but it’s happening a lot more these days.

What do I want to accomplish now that I’ve crested the hill and I’m looking down the other side? Red or black convertible?

Hell, accomplishments seem pie-in-the-sky some days. I’d love to find a career that won’t eventually be replaced by Artificial Intelligence.

I’d love to live in a world where Russian hackers aren’t doing their best to divide us. I’d like to wake up one day and learn we’ve decided to battle climate change head-on. Maybe Donald Trump will be charged, impeached and removed from office, because we know he’s not going quietly.

I’d like to throw something in the trash and not immediately worry it’s going to end up shoved in some turtle’s nose.

Cucumbers that aren’t wrapped in plastic and taste like real food would be nice, too.

You have to wonder what are we leaving our children to clean up.

I also need more sleep, to stop eating potato chips and ice cream, and to ease off the dark beer with double the alcohol.

Someone please blow up smartphones and don’t invent anything to replace them.

It’s seriously depressing when, at play group, you catch moms and dads staring at their screens rather than watching their kids make play dough, paint or dress Mr. Potato Head.

Put your phones away, people.

Maybe I should just stop worrying, pull my last-place Ottawa Senators hoodie over my eyes, cuddle up with the kids and explain to them that I’m thinking about moving us all to Iceland where we can watch the world melt away … from the screens of our smartphones.