Be an angel this Christmas 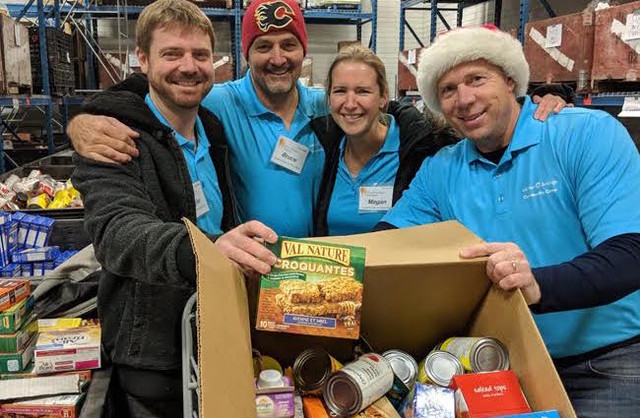 Jessica walked into our meeting much how a mother bear might have.

She seemed to stay close to the wall and near the exit, surveying the small room at the Central Okanagan Food Bank’s offices last December.

With her was her seven-year-old son, Dillon.

It was clear she was protective of him, and wary of speaking to a reporter about her life.

Jessica (who asked that their names be changed for privacy concerns) answered all the questions posed to her about why she uses the food bank.

She told me about splitting with her husband, and about their shared custody arrangements. Jessica talked about travelling regularly to Vernon so her children could see their father, who relocated to the valley from Alberta.

It was an emotional and personal conversation that not everyone is comfortable having with a stranger, especially one who is going to share it with thousands of other strangers.

Jessica didn’t shy away, however, and it’s people like her who — in their own intimate way — are helping the food bank continue the work they do.

Jessica was one of about 50 stories I’ve written over the past couple of years about the Central Okanagan Food Bank. Each December since 2016, the food bank has hired me to write its Be an Angel stories.

Each story is about a food bank client. The story is then published in the local newspaper in hopes readers will then donate when they get an inside look at who is using the food bank’s services.

There are no “typical” food bank clients, but there are similarities.

Many of the people I have spoken with are women, usually with children in elementary school or younger.

Far too many of these kids have special needs, especially autism.

Many of the women are unable to work due to child rearing, and often they are married or living with men who can’t work due to workplace injuries or other medical issues. Some have been caught in the opioid crisis.

But that’s far from the only stories I’ve heard.

There are those who simply got caught in a housing crash or an oil downturn.

Some never expected to turn to the food bank, but were faced with critical choices between mortgages or rent, bills or food.

There are stories of unspeakable tragedy, like Laila and her two sons.

Laila and Max fell in love at work. They had a child early in their relationship, but were told that would be it for them.

A decade later, Laila found out she was pregnant again, but within weeks doctors discovered Max had brain cancer. He had just months to live.

It came from nowhere.

He survived long enough to see his son born, but couldn’t make it through Christmas.

It’s inconceivable the pain that woman was feeling when she spoke about how the food bank had helped her.

She worried about her oldest son being “too quiet.” No 10-year-old boy should have to watch his father’s life end like that.

Yet, through all that, Laila had a small piece of good news to share.

The food bank staff found a minor hockey team to sponsor Laila’s family as part of the Christmas sharing program.

Laila said she returned home one night to find her fridge full of food and gifts under the tree.

It’s wrong to say that’s what Christmas is about, because Laila would suggest she needed a miracle cure for her husband’s cancer.

But let’s hope those who read her story, and the boys on that hockey team, will — like me — remember Laila’s story will happen again, and that we should all be there to catch them if they fall.

That’s why it would be wonderful if, this holiday season, you’ve decided to donate money to charity. I’d strongly encourage you to consider a food bank wherever you live.

It’s not all heartbreak, either.

Jessica was working on becoming self-reliant, going to school so she could support her two kids on her own.

Her boy wasn’t succeeding in public school, so she campaigned at a private school in Kelowna to give him a scholarship.

I was so impressed by her tenacity — she was just a slip of a girl, maybe 25 or 26 years old — that I dropped hints my brother-in-law should start volunteering at the food bank in hopes of meeting her.

Let’s hope my fundraising skills are sharper, and you’ve decided to visit the food bank’s website, cofoodbank.com, and make a donation.