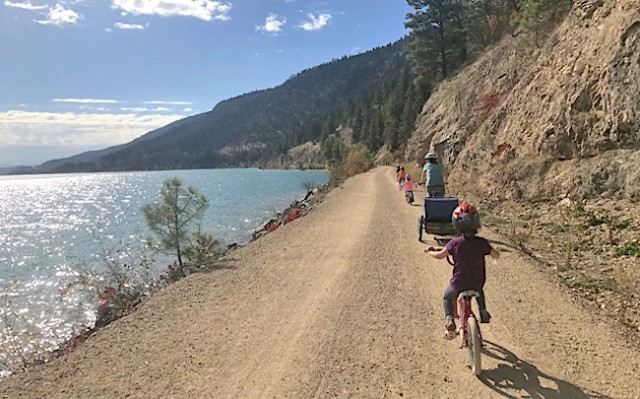 When I say my mountain bike is rock solid, it has nothing to do with racing downhill at Silver Star, leaping over boulders.

It’s actually about the pebbles I needed to fix my pedal on Saturday.

It also has something to do with the rock I needed to bash my pedal crank back onto the frame. This isn’t a big deal if you’re pedalling home from the grocery store, but it becomes a more substantial problem when you’re five kilometres into a 19-kilometre trip along the Okanagan Rail Trail and your pedal falls off your bike.

It’s downright exasperating when you’re part of a 10-person wagon train that includes your family and close friends, and you’re the person slowing everyone down.

Yes, every five clicks — if I was lucky — we’d have to stop and do the following:

I should’ve known it was going to happen. The pedal had come loose a few weeks ago, and I hadn’t properly fixed it before embarking on our trip Saturday.

This is where my wife would like to insert the following disclaimer:

She actually says this: “A stitch in time will save nine.”

I know now why her family compares her to her grandmother, because I’m certain you have to be at least 75 to use that phrase.

It should’ve occurred to me to bring the socket wrench at least. When I picked up a new nut at the bike-repair shop, they suggested I get some “Loctite.”

Perhaps they could offer a pedal-repair package, with several spare nuts, a wrench and the thread-locking glue.

Both of these seem glaringly obvious now, but I can’t claim to have ever fixed a pedal before. Chains? Maybe. Handlebars or seat posts? Perhaps.

It became such a preoccupation, I almost missed watching our kids crush the rail trail.

There were four adults and six kids between the ages of three and seven years old.

Each adult was pulling a chariot, or wagon. It contained almost everything we thought we’d need to help us travel from Coldstream to Lake Country (except a socket wrench).

We travelled with friends who also have three daughters. Our kids attend school together, and learned to ride bikes about the same time, so they’re about the same ability.

Despite one little girl bailing about 1.5 km into the ride — and then requiring our first granola bar pitstop 500 metres later — the kids were troopers.

The youngest two — each three years old — rode in a chariot, but the older four girls were on their bikes for at least half the trip.

After a refuelling lunch break at Kekuli Bay campground, the kids pedalled roughly all the way to Rattlesnake Point five km south.

It became a badge of honour to lead the pack, and at one point I saw our middle baby, Betty, pumping her little legs like the pistons on a Ford Pinto to get ahead.

Of course, I saw it from far back, but I appreciated her effort nonetheless.

Hey, when your five-year-old daughter can get further on her “Li’l Princess” bike than her dad, you know you’ve done something right as a father.

When I finally caught up to them, the girls were all pooped.

We then divided them evenly among the chariots, and proceeded to cruise the final five km to Oyama.

My friend. Steve — the engineer who devised the rock-stopping method to fixing my pedal — kept going into Kelowna from there, and reported later we didn’t miss much.

If you’re going to try the route, don’t fret: It’s mostly flat, wide enough to allow “professionals” space to pass the slow movers, and provides enough natural breaks that most kids could easily conquer a sizable section without much effort.

As long as they don’t have training wheels, they should be fine.

The only advice I’d give is, there aren’t many “extraction” points should you need to bail out and call in your ride home (grandma or grandpa).

The stunning scenery is worth the effort, too, as long as you don’t miss it because you’re staring at your pedal, praying it won’t fall off again.