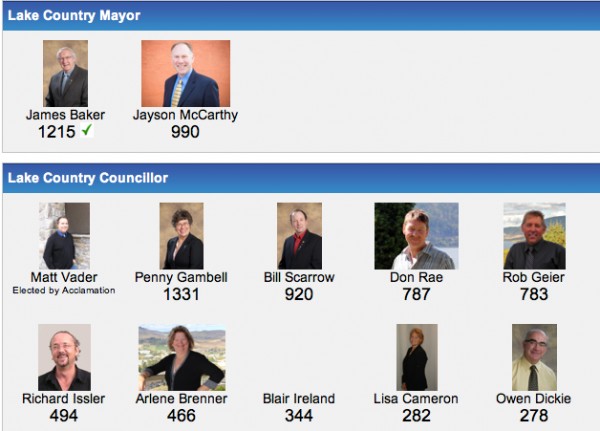 While obviously pleased with his victory, Baker says it's never a sure thing.  "I always keep thinking I'm one vote behind and have to keep working," he says.  "One never knows at a local government level what might turn people against you, but in this case I'm glad for the support that I have and that people have confidence we can continue doing good things."

Baker's priorities for the coming term include road improvements and a long-term transportation plan, infrastructure development, and forging a plan for Pelmewash Parkway, the old section of highway 97 between Winfield and Oyama which now belongs to the district.

The new council in Lake Country will have a mix of new and familiar faces.  The two councillors at large are Penny Gambell and Bill Scarrow.  Gambell, entering her fourth term, topped the polling with 1331 votes. Bill Scarrow, a former councillor, returns with 920 votes. Also running for councillor at large were Don Rae with 787 votes, Richard Issler with 494 and Arlene Brenner with 466.

In the Winfield ward, incumbent Rob Geier handily beat Randy rose, 783 votes to 248. Rose, the former chief administration officer at the district, has been critical of the current council's fiscal policies, claiming $1 million in waste during the recent reorganization within the district. Mayor Baker has been just as vocal in disputing Rose's claims.

The Okanagan Centre ward has a new representative in Blair Ireland. He received 344 votes, ousting incumbent Lisa Cameron who had 282 votes. Recent controversy in the ward over council's decision to remove private docks and other structures from the public waterfront in Okanagan Centre created a clear split between the two. Cameron supported the measure, while Ireland felt there had been inadequate consultation with the owners of the structures. While the issue was settled before the election, the issue divided the community.

In Oyama, incumbent Owen Dickie returns to council with 278 votes, defeating Keli Westgate, a newcomer to Oyama, who polled 127. Among Dickie's priorities is improved signage along the new section of highway 97 that now bypasses Oyama.  He feels it's too difficult for drivers to find the community and that's had a negative impact on the ward.  He's also concerned about the environment, pointing out that according to Interior Health, half of Oyama's septic systems are in poor shape.

The Carr's Landing ward was won by acclamation by Matt Vader, who is new to council. The incumbent, Barb Leamont, did not run.

The Lake Country school trustee seat was also won by acclamation, with Deb Butler returning to the job.