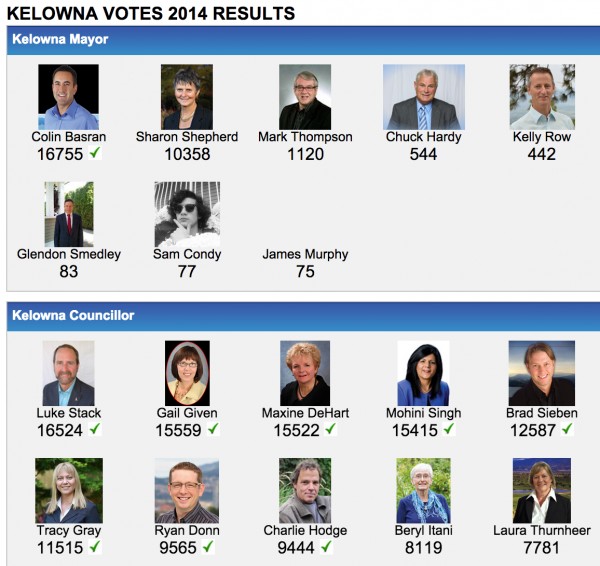 Kelowna’s municipal government had a good shake up this election with a new young mayor and four new faces on council.

The city, often criticized for its aging politicians, voted for a younger group to take lead for the next four years.

In the mayoral race, that wasn’t quite as close as some expected, 37-year-old Colin Basran took the top seat with a healthy 57 per cent of the votes.

“I was completely freaking out, I was a nervous wreck, but at the end of the day I am thrilled with the result and I couldn’t be happier,” shared a beaming Basran. “It feels surreal. Hopefully I can just relax a little bit now.”

Basran’s only significant competition came from of two-time former mayor Sharon Shepherd, who conceded defeat shortly before 9 p.m. taking 35 per cent of the votes cast.

“The support that I have had for this campaign has been outstanding,” said Shepherd. “I am obviously disappointed. It is has been a lot of hard work in a short time, but I don’t feel any regret in putting my name forward and I would like to congratulate Colin and the new council.”

The remaining six mayoral candidates did not appear to have a chance, taking less than 10 per cent of the total votes counted combined.

The often outspoken and controversial ‘Taxpayers First Party’ was unable to secure any seat on council, with all five candidates falling short in votes.

While other declared political party, Prosper Kelowna, also lost a chance to have a member on council with its candidates’ nearly 5,000 votes behind winning a seat.

The unofficial numbers show that 29,661 votes were cast out of the 99,000 eligible in the City of Kelowna, just under 30 per cent.

Official numbers are expected this week once all voting documents have been reviewed.

Check out the results and all the numbers here.