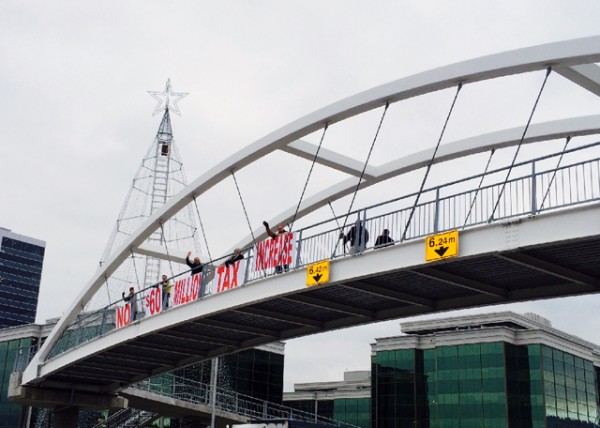 Photo: Carmen Weld - Castanet
TaxpayersFirst took to the Harvey overpass to get their message out Friday morning

TaxpayersFirst are reaffirming their guarantee of a zero per cent tax increase on the eve of Saturday's municipal election.

The five candidate slate has stated that if all five candidates (Carol Gran, Billie Aaltonen, Michael Gorman, Graeme James, Dale Olson) are elected, they will guarantee a zero tax increase for the entire four years of their term -- or all five will forfeit their councillor salary.

TaxpayersFirst say the choice is between a zero tax increase or the prospect of an additional $60M in taxes over the next four years.

The city's five-year financial plan, approved in the spring, forecasts a cumulative tax increase of 22 per cent by 2018.

If the forecasts are correct, that would work out to a tax increase of $60.6M over the next four years.

In a news release, TaxpayersFirst state that Walter Gray, Andre Blanleil, and many of the councillors they worked with claim that a Zero Tax Increase is unwise and impractical. Yet they passed a tax increase of 0.11% just two years ago.

That council, including others running in this election, passed that budget.

“Twenty-five years ago my property taxes were $70 a month. Now they are $375. It’s like a mortgage that never goes away, and the payments get bigger every year”, says Taxpayers First candidate Dale Olson.

Candidate Mike Gorman adds, “We have many seniors on fixed incomes in Kelowna. Somebody has to draw a line in the sand, to curb the never-ending increases. If not today, when?”

Carol Gran is “concerned about our taxpayers. It’s hard for the average taxpayer to even comprehend what’s taking place, or what $60 million means.”

“Look for an extra $1000 on your tax bill over the next four years,” warns Graeme James.

“This is an opportunity to change the way business gets done at City Hall. I have young children, we need to set things on a different course for them,” says mom and candidate Billie Aaltonen.

The TaxpayersFirst slate says this election is about responsible financial management at City Hall, or having your pocket picked for an extra $60 million over the next four years.