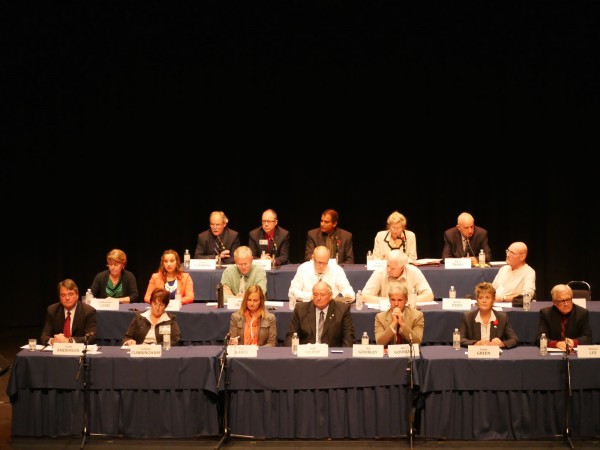 A crowd of more than 500 people showed up for the all candidates forum in Vernon Tuesday night at the Performing Arts Centre.

Economic growth, business development and jobs were a major topic for the evening, as was the vitality of Vernon's downtown core. And while most in the crowd were middle-aged or seniors, some of the focus for the evening was on keeping young people in Vernon and attracting more young working people and families.

Five candidates for the mayor's seat and 14 hopefuls for the six councillor spots answered questions posed by the audience. The format for the event required that questions be directed to a specific candidate, and as a result not every candidate could address each question.

Several questions were asked about Vernon's downtown core, including how it could be further revitalized, and how to help it compete with outlying 'big box' shopping.

One resident, directing his question to Mayoral candidate Mary-Jo O'Keefe, asked about spending so much on downtown when only a fraction of Vernon residents live in the core area.

O'Keefe replied that a strong downtown core benefits the entire city and that in many places the downtown is a window into the community.  "People often travel through a town and they'll make judgments on whether that downtown core is a vital, living place or not…I think we do need to have things in place that will help the downtown succeed."

Incumbent councillor Brian Quiring also addressed the issue, saying a community's downtown is the face it presents.  "Its condition speaks volumes about the health of the local economy. A vibrant downtown, or the lack of one, affects the community's ability to attract and retain residents, business and institutions, and jobs and investment that enable a city to endure and thrive." He added the downtown area is a significant source of employment and tax revenues.

Mayoral contender Jamie Morrow feels the downtown should grow vertically, with more mixed use development. "Retail, different businesses, coffee shops, offices, with housing up top." He cites numerous benefits of mixed development including greater housing variety and affordability, less distance between housing and workplaces and other amenities, and walkable neighbourhoods.  "We can either increase taxes or increase revenue, and I want to increase revenue."

Questions were also asked about attracting business and industry to create jobs and increase Vernon's tax base to pay for new amenities and infrastructure.

Mayoral candidate Akbal Mund says the perception is that the City of Vernon is hard to deal with, and that has to change. "There's developers who want to develop here, but they can go somewhere else right now and work, and they're not facing the problems they get in this city." He says Vernon needs to be friendlier.

Council candidate Brian Quiring, an incumbent, says Vernon is not a tough place to do business. "The Canadian economy is a tough place to do business. It's very easy to paint council and city staff all with the brush that we're closed for business. We're not. It's just not that easy to turn it around."  Quiring feels council's past efforts are paying off, and adds the focus should be on keeping existing business, more than attracting new ones.

On the issue of attracting young families and workers, incumbent councillor Juliette Cunningham was asked what council can do. Cunningham says losing young families is a concern. "Without the whole range of age demographics I don't think you have a really vibrant, healthy, complete community." Cunningham notes good paying jobs and  affordable housing are key. "We're moving away from subsidizing and supporting non-profit housing and just recently…approved a program for grants towards the private sector building rental housing

All but one candidate attended the forum. Council candidate Colt Wilson was not available.

Recorded Live Oct. 28 - All candidates forum from the Learning Arts Centre in Vernon.

Below is the second part of the Vernon Candidates' Forum: