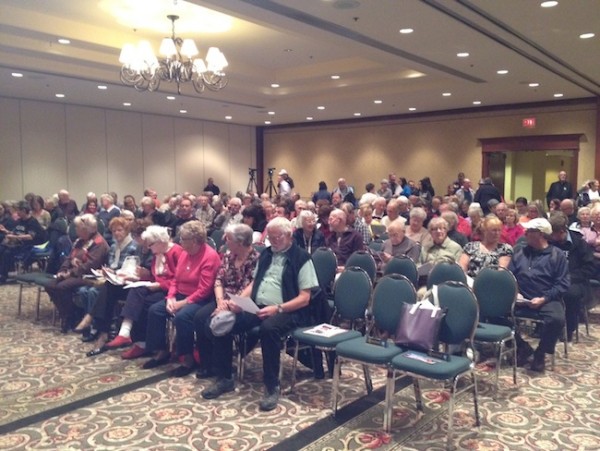 Twenty-four candidates for Penticton council in the upcoming election, presented their platforms and fielded questions at a forum Tuesday night at the Penticton Lakeside Resort.

The forum, attended by around 500 people, was co-sponsored by the Penticton Herald and Penticton and Wine Country Chamber of Commerce.

It was moderated by Herald Managing Editor James Miller.

Each candidate was given the opportunity to speak for two minutes, then answer three questions from the audience or organizers.

The candidates, from all walks of life, are vying for six seats on council in the Nov. 15 election.

Here are the names of the candidates and some of their responses.

Steve Boultbee: Thanked council for the firefighter addition and put forward for consideration putting to use the failed hockey dorm property for a dormitory for nursing students. He promoted replacing the rescue boat and having TED talks, rather than Boonstock.

Patrick Buchanan: Stated he has heard a lot of negativity about what Penticton is not doing. He instead pointed to some successes, such as the Penticton BMX track going in at an affordable price. He stressed that he has had a long history of giving back to and working in the city,

Paula Cattani: Stressed that she just wants to create jobs in the city, and suggested re-opening the packinghouses. She added that now is the time to invest in the downtown and hopes to see construction work done on roads in the Apex area.

Don Dumesnil: Told those in attendance that he decided to run for council because of his experience raising children here. He stated that he knows he can give residents proper representation, based on logic, common sense and fairness.

Ryan Foster: Described himself as an organic farmer. He said to thrive we do need to prosper. That it's all about quality of life and healthy affordable food. He talked further about having the infrastructure in place to generate well over 50 per cent of our own electrical power and creating a thriving, resilient community.

Garry Gratton: Stated that Penticon is clean, green and safe, and he wants to keep it that way. He told the crowd that your interests are my interests and promised them they would be well served, with more transparency and much more common sense.

Brian Henningson: Stated that he was interested in creating positive changes at City Hall. He provided a short term list of easy fixes for parking, transit and council's long in-camera meetings.

Tim Hodgkinson: Did not attend due to illness. In his address read by Miller, Hodgkinson stated he was for changes that offer collaboration over division.

Brian Horejsi: Told those in attendance, it was time for a person on council who represents the citizens before any other interest. There is one thing in common, he said. The majority have told him of not being given the chance to talk to council or administration. He stressed that was not his vision of democracy.

Lynn Kelsey: Stated she would listen to the citizens, not just special interest groups. She said she will do her homework and will promote a safe community and advocate for a housing strategy.

Helena Konanz: Told those in attendance she has been your independent voice on council, voting against electrical rates going up and for increasing funding to the economic development office. She was the first councillor to support Boonstock, she said, and will continue to promote Penticton as a college town.

Brent Madsen: Described his years as a successful Penticton business owner. He stated that he may not have all the answers, but he is a really good listener and loves Penticton.

Andre Martin: Described his platform as capitalizing on existing opportunities, creating new opportunities and planning for the future. He stated I really do believe in Penticton, I am passionate about Penticton.

Doug Maxwell: Told the crowd he wants to make Penticton the safest, cleanest and best city to bring a family to for vacation or employment. He stressed that he wants young families to be able to purchase housing here and have a more vibrant and full downtown core.

Jenine Nicholas: Stressed that she is a strong proponent for youth, because they are the future of the city. She would like to see a way of bridging youth and seniors through a mentorship program. She further stressed that she valued the city and the direction it is going.

Kevin Noonan: Stressed collective unity, not division. He stated that it's time to stop being oppositional and be more proactive and positive. You reap what you sow, he said. We need to turn this into a positive city again.

Max Picton: Told the crowd this is a pivotal election, and we are in need of a balanced council. Picton, who stated he grew up in Penticton tourism, said in addition there needs to be a balanced economy, with the troubling gap with young adults addressed.

Vic Powell: Described his military background and stressed his commitment to the taxpayers of Penticton is to provide honest and open leadership. I believe this election should focus on one basic issue, fiscal responsibility, he said.

Katie Robinson: Stated there were four key important issues: that Penticton needs strong leadership with a longterm vision, cost controls need to better capitalize on existing assets, the need to protect neighbourhood identities and to get back to basics, knowing the quality of life is secure.

Darryl Sanders: Stated his reason for running is to be a voice for the people and that Penticton needs a kickstart.

Tarik Sayeed: Stated he supports economic growth through embracing technology, environmental care and social belonging. He believes Penticton has the opportunity to be recognized as a role model for Canada and this is what he will strive for. Leading as a role model instills pride for myself, my family and our community, he said.

Judy Sentes: Recognized the achievements of council in recent years, including completing the Martin Street upgrade, the first phase of the Okanagan Lake waterfront development and being recognized federally for fiscal responsibility. She stated municipal government must remain approachable and strive for the will of the whole.

Debra Slater: Said she would like to see more diversity and industry. Penticton has always been a tourist destination, but we need more, she stated. Our sidewalks should not roll up at the end of August and the days of saying young people should go up north, should be over.

Campbell Watt: Stated he has served on several boards and committees and believes he has the experience to be effective. He understands, he said, that there are three sides to every story, and he is capable of finding a solutions, in particular to challenging and contentious issues faced by the city.

Following the brief presentations provided by each candidate, they answered questions on topics ranging from Boonstock to the hospital expansion and revitalization of the downtown.

There will be a forum for the three mayoral candidates at 6:30 p.m., Thursday at the Lakeside Resort. They are Andrew Jakubeit, Jukka Laurio and John Vassilaki.