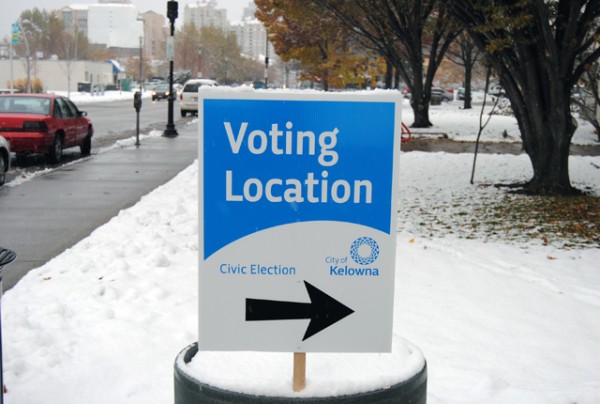 The City of Kelowna is trying to make it as convenient as possible for people to cast their ballot in next month's municipal election.

“We’ve increased the number of voting locations for 2014, while building on the goal to offer voting opportunities where people live, work and play,” says Chief Election Officer Karen Needham.

Advance voting will once again be offered at UBC-Okanagan, Okanagan College, Parkinson Recreation Centre and City Hall, while on general voting day, 13 locations throughout the city will include Orchard Park mall.

A new location for 2014 is the Capital News Centre, a hub for transit, families and community events.

Any qualified elector can vote during an Advanced voting opportunity which will be held between 8 a.m. and 8 p.m. on the following days and locations:

Voting locations are open from 8 a.m. to 8 p.m., with the exception of the Orchard Park location, which will be available for voting between 8 a.m. and 6 p.m.

A voter assist terminal is available at the City Hall voting location from Nov. 12 to 15.

The voter assist terminal allows voters with disabilities and other special needs to mark their ballot privately and independently.

All voting locations are also accessible for persons with disabilities, with election officials offering assistance with voting, either within the voting location, or curbside if voters are physically unable to leave their vehicle.

For eligible voters out of town on voting days or those with disabilities, a reminder that the Office of the City Clerk is accepting applications for mail-in ballots which are available at kelowna.ca/election or at City Hall.