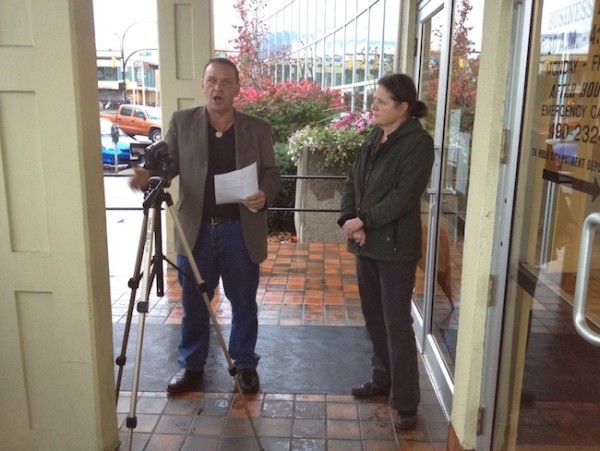 The gathering was organized by local residents Kevin Proteau and Vicki Lightfoot, who have concerns about the machines.

"The electronic counting machines are dependent on software which can be manipulated with a memory card, the simple switch of a memory card during the day of the election can adjust the way the votes are counted," said Lightfoot.

The pair further stated there have been widespread problems with the machines. Since the year 2000, there have been many media reports in the United States with regard to the machines, they stated, and many states have switched back to manual counts due to public concerns and court cases.

The two are instead requesting a manual vote count in the upcoming municipal election, with Proteau suggesting having students from Okanagan College participate in the count.

Several candidates attended the protest, with some showing support for what  Proteau and Lightfoot had to say.

Ryan Foster stated: "anybody who knows anything about hacking, knows even the big boys get hacked."

Keith MacIntyre, a candidate for the school board and expert programmer, responded by saying, there is no way the system the City of Penticton uses can be hacked remotely, easily or otherwise.

"In an election such as this there would be no reason to hack, even if you could, because a paper recount would easily show the disparity. The only elections it would make sense would be a large election in multiple districts where you could hide the discrepancy over multiple locations," he said.

Background on the matter was later discussed at the council meeting, with Corporate Officer Dana Schmidt telling council the city has used the Accu-Vote OS machines since the 1999 election. It is a stand alone machine, she said, that is not network enabled, thereby not allowing for any hacking via the Internet.

Proteau told council at the end of the meeting, he would continue to fight the city on this issue.