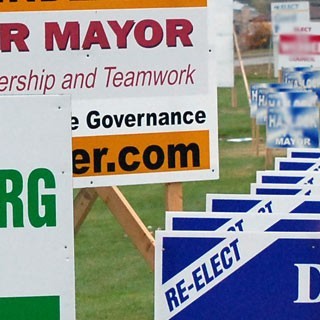 Get ready for a deluge of new signs coming to a street, or lawn near you.

Beginning Tuesday at 8 a.m., candidates looking for your vote in the Nov. 15 municipal election will be able to place signs on roadways and on private lawns and yards.

That time also coincides with when candidates are able to file nomination papers.

As of Friday, 63 nomination packages had been picked up from the clerks office in City Hall.

In total, 15 packages have been picked up for mayor, 38 for councillor and 10 for school trustee.

The single biggest complaint during election time, be it municipal, provincial or federal, centers around the placement of election signs.

During the summer, City Council voted to amend the sign bylaw, eliminating the prospect of one candidate flooding a particular frontage with dozens of signs.

The new bylaw restricts candidates to just two signs per frontage - be it public or private property.

The bylaw pertains to candidates, not the total number of signs in general, meaning popular areas in front of Rona on Springfield and Costco on Highway 97 and 33 could still be deluged with signs, just not for one or two candidates.

The area around Costco and other popular intersections are also unique in the fact that they are considered two frontages - in the case of Costco - one along Hwy 97 and one along Hwy 33.

Any candidate who puts their signs up early will have them removed by city bylaw officers.

Returning Officer Karen Needham says the candidate would be contacted and informed the city has those signs.

Election day is Nov. 15, meaning you'll have six-and-a-half weeks to wade through the hundreds and hundreds of election signs.