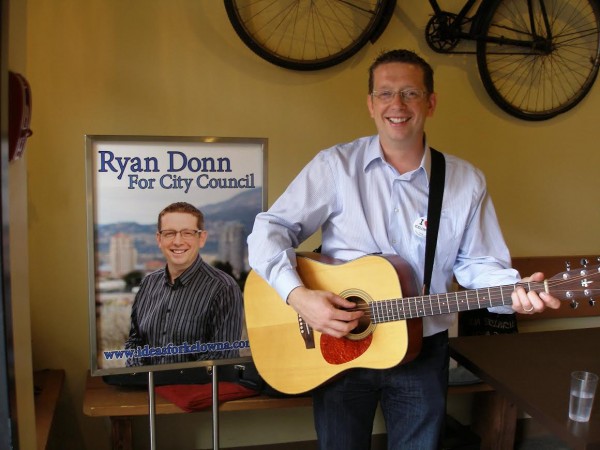 Photo: Marzio Manderioli - Castanet
Ryan Donn announced his candidacy for City Council Friday with a song and a pledge of collaboration.

Ryan Donn hopes to hit a positive chord with the Kelowna electorate.

Donn, who is a singer, songwriter, columnist and a program coordinator with Festivals Kelowna, has become the latest person to declare his intentions to run for a seat on Kelowna City Council.

In making his announcement in front of several supporters at the Bike Shop Cafe, Donn says he's running because he loves Kelowna and is driven by the community.

"I have a chance to be a part of the process to bring my ideas and the community's ideas and promote all the positives we have in town and bring those to the council table. I would love people's support to do that," says Donn who believes he is a natural collaborator.

Donn says it was that type of collaboration that gave him the idea for New York New Years. He says he heard from people that Kelowna needed a family friendly New Years event and turned that desire into an event that has drawn more that 12,000 people over its first two years.

As for taxes, which has become a central issue leading up to this year's election, Donn says he doesn't see it as a cut and dried issue.

"If I see an investment of a few million dollars saves us $6M down the road I'm ready to jump at that because that's what's needed to move the city forward at that moment in time. I think I need more flexibility rather than committing to an exact percentage of increase or decrease," says Donn.

"I love the idea of keeping it the most cost effective as possible but there is no way I would ever commit to a certain number because you don't know until you go in there. You need a certain level of creativity to be able to create the best solutions."

As for his current position with Festivals Kelowna, Donn says he won't have to step down during the campaign or if he is elected.

He says he'll continue to work a couple of days a week and a plan has been put in place if he does win in November.

Donn has also established what he calls an ideas website, www.ideasforkelowna.com in which he will post his ideas while at the same time asking for your ideas.