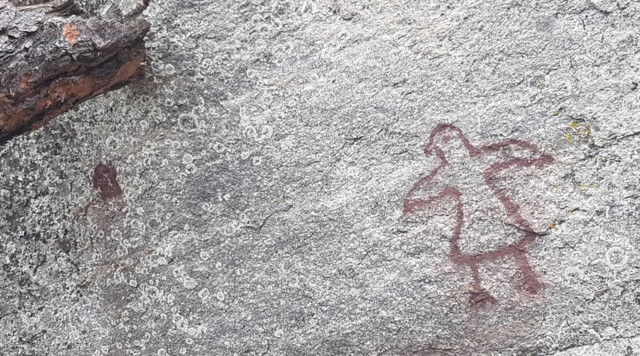 The recent defacing with graffiti of a pictograph east of Osoyoos Lake is unfortunately one of many occurrences across Canada. According to Dagmara Zawadzka, a researcher in archeology, at the university de Montreal-Quebec, pictograph sightings in Ontario, Quebec, Alberta and BC are in danger of being wiped out by vandals. The more accessible the location, the greater the likelihood they will become vandalized.

On October 2013, it was discovered that someone had blasted paintball pellets at an ancient pictograph near Nelson BC.

In 2017 CBC news reported that close to 100 sacred pictographs in Matinenda Provincial Park near Elliot Lake Ontario, had been spray painted with graffiti.

Although pictographs, known and unknown, are found on both private and public lands, they are protected under the Heritage Conservation Act. Researchers however claim the government hasn’t allotted enough resources in protecting these sites, which are usually found in open areas.

This does not bode well for the pictograph that is located in the hills above the 880 Naramata Road property, where a new road is slated for construction, in order to connect Naramata road with Canadian Horizons’ proposed 328 lot development located on Spiller road. The bird image depicted on rock represents an ancient past. No one knows whom the artist is, although it inevitably has a story, spiritual significance and holds a cultural history with local Indigenous people. Allowing access into this area will only increase the likelihood of it becoming damaged or even destroyed.

Possibly, this is one more reason for the citizens of Penticton to oppose any hillside development along the Naramata Bench. Such features as natural habitats and archeological treasures should be preserved and protected, at all cost.