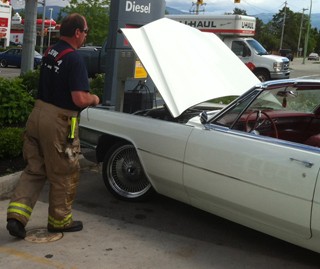 Photo: Jim Judd
Fire Chief Jeff Carlyle makes certain the fire is out under the hood of a 1965 Cadillac convertible which caught fire Saturday afternoon, but was quickly snuffed out by an onlooker with a dry-chemical extinguisher

Tony Crescenzo, a Kal Tire employee who  volunteering as a barbeque cook at the Second Annual Capital One Run For The Kids, noticed a car fire occurring just across the street from his portable kitchen in the parking lot of the Shell service station at the corner of Richter and Harvey Avenues. He quickly gathered up his fire extinguisher, rushed across the street and snuffed out the engine fire which by then was threatening to further engulf a vintage, 1965 Cadillac convertible.

`He`s only got a big blister on his hood,`said Crescenzo who immediately returned to his cooking post once the fire was out. His action was so quick, he had the disaster taken care of even before Kelowna Fire and Rescue could respond from three blocks up the street. Ìt sure could have been a lot worse.

Not only did he have an extinguisher, but considering the nature of the fire - electrical - he had the proper fire extinguisher it turns out.

`Looks like someone had a dry-chemical extinguisher,`said fire chief Jeff Carlyle.

Damage was confined to the engine compartment spark plug wiring, distributor and air breather, but will no doubt survive to run many more years. 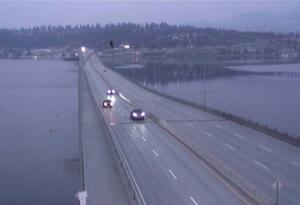