Jail for McKinnon after guilty plea 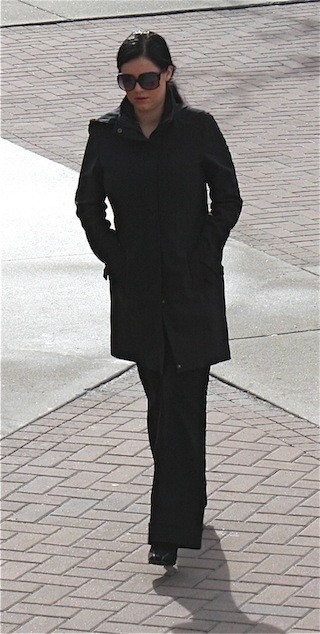 Photo: Ragnar Haagen
Lisa McKinnon on her way into the Kelowna Courthouse on March 1, 2013.

The daughter of RCMP superintendent Bill McKinnon has pleaded guilty to drug trafficking charges and has been sentenced to seven months in jail for her role in a dial-a-dope operation.

Lisa Hope McKinnon’s voice was barely audible as she acknowledged her guilty plea to one count of trafficking in a controlled substance and two counts of possession for the purpose of trafficking at the Kelowna Courthouse on Friday.

The 23-year-old was busted last year with small amounts of both crack cocaine and heroin after Kelowna RCMP witnessed her conducting hand-to-hand drug transactions.

Justice Vincent Hogan declared the circumstances surrounding McKinnon to be “not that unusual”, stating he conducts these types of sentences every few weeks.

While he doesn’t assume that many of these people are drug kingpins, he also did not feel a conditional sentence was appropriate in this case, as it would not meet the principle of general deterrence.

“You’re peddling poison and your addiction to the community. It’s extremely destructive,” Hogan said during sentencing.

Citing an overwhelming amount of case law that suggests a range of sentencing between six months and one year, Hogan said he did not want to be too lenient and make McKinnon into the “poster girl for dial-a-dope operations” – young women with no prior criminal records.

He gave McKinnon credit for her guilty plea and other mitigating factors such as her age and her 10 months spent in rehab at VisionQuest Recovery Society, but that was outweighed by her participation in a sophisticated operation that peddled drugs to youths.

The court heard that Kelowna RCMP received a tip  – possibly from the scandal website thedirty.com – that led them to observe her conducting brief dealings with numerous individuals, at one time witnessing her appear to take part in a hand-to-hand transaction.

On Feb. 28, 2012 officers saw her meet five more people before arresting her at Mission Park Mall during another hand-to-hand transaction with a 19-year-old female who later admitted she was buying heroin.

Upon moving in on Mckinnon, the court heard that officers saw her mouth the words “I’m busted.” They found two cell phones in her lap and a $20 bill between the driver seat and door, believed to be from the transaction they witnessed – a search of the other female found a small flap of heroin in her front pocket.

Officers also found a Louis Vuitton handbag containing plastic bags of both heroin and crack cocaine and $675 in cash. Inside the purse they discovered a day planner with entries or ‘score sheets', with numbers indicative of prices for street level drug amounts and transaction records.

When she was taken back to the RCMP detachment, McKinnon acknowledged having the two different drugs and used words suggesting she was taking the drugs herself.  One of her cell phones also continued to ring for approximately one hour – officers answered five different times to callers looking to buy drugs.

Her lawyer Chandra Corriveau attempted to get her client off with a conditional sentence that could be served in the community, provided she stay with her parents at their private residence. Corriveau argued a jail sentence would only do more harm and McKinnon had expressed remorse and was not a danger to the public.