Minding your own beeswax

It's hard to overstate the importance of honeybees to the food chain.

Bees pollinate over 70 different crops and without them, vegetables, fruits and nuts which have become a huge part of our daily diet are at risk of vanishing. Everything from apples to strawberries, asparagus to squash and almonds to sunflowers would suffer. 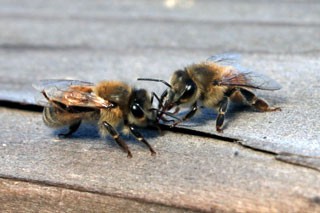 Photo: Contributed - Facebook
Honey bees have been dying off at an alarming rate, and no one is sure why.

Since beekeepers first sounded the alarm about disappearing bees in 2006, researchers and scientists have struggled to find out why so many hives are dying off across the world.

"As we always say, if you don't have honey bees, then get used to eating gruel, " says Bob Chisholm, regional representative for the North Okanagan Division of the BC Honey Producers Association.

Recently, scientists have described these sudden collapses as Colony Collapse Disorder, although the term is used as an umbrella to cover the variety of problems affecting the hives.

"If we start losing bees in a serious way, the problem is very awkward," says Chisholm.

There are a combination of factors that could be making bees sick, including pesticide and herbicide exposure, invasive parasitic mites, an inadequate food supply and a new virus that targets bees' immune systems. However, the only firm conclusion reached so far is that more research is essential to determine the exact cause of the vanishing bees.

"It's never really been defined as Colony Collapse Disorder here in Canada. Now having said that, we have suffered somewhat abnormal bee losses over the winter which could be construed to some of the similar things that CCD is described as in the States." 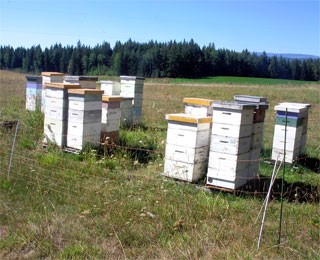 Chisholm tends to over 250 hives and admits the battle is on.

"We are into a variety of disease management issues more so now than we ever have been."

So far, scientists have not been able to come up with a definitive cause, but they are getting closer.

Some beekeepers who have generations of experience say it's a cyclical event that has happened before and will happen again. Still, there is evidence that something different is at work now.

"The fact of the matter is we are getting identified new strains of disease or new viruses every year," says Chisholm.  "But they may have been there for years and nobody realized they were there."

Another mystery is the seemingly random nature of the attacks on the hives. Along with a variety of different threats, some areas are hit harder than others for no apparent reason.

Normally, around 10-15 percent of a hive will suffer winter die-off, last year Chisholm lost almost 50 percent, his worst year ever. Other beekeepers may have suffered even higher losses.

He was able to recover from these losses by using a variety of techniques to "re-grow" his population. With luck, his operation will be back to normal this year, although he won't know for sure until the hives come out of their winter slumber later this year.

Chisholm noticed the ones that did survive last summer are doing even better now.

"The interesting thing is, and I don't know why, my 'girls' that survived whatever it was last year came through the winter in good shape really did well. Their hives are in really good shape."

For large operations, this type of recovery is more likely than it is for smaller colonies, but most of the beekeepers in BC are classified as hobbyists, with as few as one or two hives in their yard. As a result, losses in the 50 per-cent range can be devastating to those operators.

Another mystery surrounding the vanishing bees is, where did they go?

In many reported cases around the world, the hives simply emptied with little evidence as to their whereabouts. In Chisholm's case, some of the bees were just gone, but there was plenty of evidence left behind.

So far in Canada, the recent die-offs are not officially classified as Colony Collapse Disorder or considered the result of a single problem with a single solution. Instead, they are generally considered to be a result of a variety of different and unique threats which should be dealt with one at a time.

What's not in dispute is the devastating effect that the loss of honeybees would have on the environment and our lives. 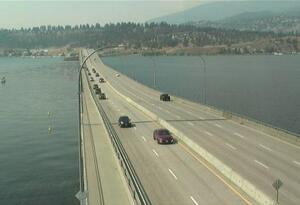