It would be a battle for the ages - one UFC President Dana White would surely like to promote. 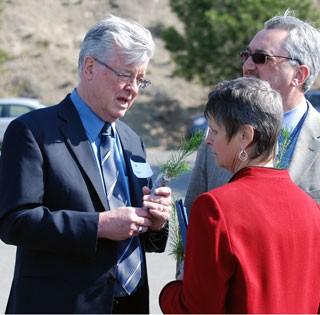 Walter Gray is contemplating a return to politics and another crack at the Kelowna mayor's chair.

His bid for a fourth term was derailed by Sharon Shepherd, who upset Gray in 2005 by nearly 2,300 votes.

Gray says he is being encouraged to run for mayor but admits he has not made a decision one way or another.

"Pressure isn't the right word for it. I'm getting enthusiastic encouragement," says Gray.

"People are telling me they hope I run, they wish I would run, or 'please consider it'. I guess I'm being influenced by that to the extent that I am saying I better give this one some final thought."

"I will have done that, I would think, in the next week."

Gray says he is not leaning one way or another.

"I'm just analyzing the opportunity. You make a list: 'what are the reasons not to do it' would be personal, and the reasons to do it would be because I think I could do a job."

Over the past six years, Gray says some things council has done he would have done differently, but adds he's not passing judgement on the job done by Shepherd.

"That doesn't mean I would be right and she would be wrong," says Gray.

"We have a different style of leadership. I'm probably more about the process. That's not to say I'm good and she's bad or I'm bad and she's good, we're just different."

Gray was a supporter of downtown revitalization and the CD21 Zone. Prior to final debate, Gray implored council to give fourth and final reading to the document in an open letter to council.

Gray says former Councillor Carol Gran, who has recently returned to Kelowna after spending several years with her family in Arizona, is also contemplating a return to civic politics.

If Gray decides against running, Gray says Gran will consider making a run.

Gray says if he does decide to run against Shepherd, Gran is expected to run again for council.

Prospective candidates for mayor, council or school board can pick up nomination packages at City Hall.

Nomination forms must be returned to City Hall between October 4 and 14.