ATV's Not Welcome On KVR

The riders say they're being banned from riding their vehicles on BC trails including the Kettle Valley Railway near Kelowna.

In late August, the Campbell government announced the 2010 Trails Initiative but ATV's were not included.

Pat Hughes of the ATV Kelowna Club says that's because Trails BC doesn't want motorized vehicles riding the KVR. "Their core groups, as far as they're concerned, are walking, bicycling, horses and cross-country skiing. They're doing everything in their power to take us off."

Hughes says motorized vehicles, especially ATV's, are not welcome because of noise and environmental concerns. But he says Trails BC is misinformed. He says ATV's do less damage than horses and even bicycles.

Upwards of ATV 200 riders held a "Black Robe Ride" on the KVR near McCulloch Lake last weekend to send a message to the Campbell government. Hughes says the government will be the big loser by shunning ATV's because they generate millions of dollars in tax revenue through sales and tourism.

"We pay taxes to maintain this trail." We're not going away." 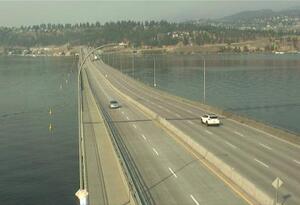