The Owner of Kelowna Hair Design has high praise for paramedics but not for BC Emergency Health Services' response times.

Colleen Woelders says a client of the salon suffered what appeared to be a stroke or a heart attack on Thursday morning. She says staff and other clients jumped into action, doing CPR and using a defibrillator to try to keep the woman alive, but what has her rattled is how long it took for the ambulance to arrive.

“We were on the phone, trying to get 911, trying to get the ambulances here. They are so backed up and so busy, it took them so long to get here that we were panicking basically,” said Woelders. “She died. We watched her die in the chair.”

She says emergency responders managed to restart the woman’s heart, but she fears the long wait may have left her brain dead.

Woelders estimates it took at least 20 minutes for an ambulance to arrive at the salon, which is located at 1525 Gordon Drive.

“The response time was just stupid.

“I think these ambulance people are so overworked, so busy saving street people’s lives right now they’re not there for the elderly, the regular Joe that needs them immediately.”

She’s upset with recent cuts in service in the Kelowna area.

Earlier this month, B.C. Emergency Health Services explained to Castanet why it cut three ambulances from its Kelowna service.

In an email response, a service spokeswoman says while the three ambulances are still in Kelowna, they are not being staffed at this time because language in the collective agreement with the paramedic’s union prevents that. But she also states Kelowna is not eligible for funding that could pay for their operation.

Woelders says the first responders did a tremendous job once they got there, and took the woman to Kelowna General Hospital with a heartbeat.

“I thank them. I don’t have any complaints whatsoever about their work but I think that if she is brain dead it’s because of the time.”

“We can confirm BCEHS received a call at 10:36 a.m. (Thursday) to respond to a medical incident in the 1500 block of Gordon Drive in Kelowna. BCEHS immediately dispatched two ambulances and notified firefighter first responders as we do with all life-threatening calls,” said BCEHS in an email to Castanet.

“Our records indicate firefighters arrived approximately 6 minutes later, and the first ambulance paramedic crew arrived on scene approximately 8 minutes after the call came in to our dispatch, at 10:44 a.m.”

The email goes on to say, “we know it can be stressful waiting for an ambulance. We encourage patient families to connect with the Patient Care Quality Office if they have any concerns or questions.”

Woelders points out that part of the delay was the time it took to relay information to the 911 operator before the ambulance was dispatched.

She expressed thanks to the 'angels' who helped including the firefighters, paramedics, staff and other customers who came to the woman’s aid. 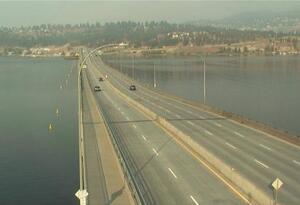