The fire occurred on the 200 block of Leon just before 11 a.m. and appears to be sparked by a small camp cook stove that spread into some nearby bedding. Temperatures are dropping below zero this week and more than a hundred people are sleeping on the streets of Kelowna.

The downtown on-call team, in the red shirts, are employed by the Downtown Association and typically spend their time helping keeping the peace downtown.

"All in a day's work," said one of the DKA employees, "you just never know what we're going to have to do."

The fire was quickly doused using a large pail filled with water. No one was injured.

Over the weekend, the Kelowna Fire Department responded to two separate fires at homeless encampments as temperatures drop and homeless individuals try to stay warm.

With shelters at capacity, it's estimated at least 100 people are sleeping on the streets of Kelowna.

Kelowna Gospel Mission executive director Carmen Rempel says their new shelter on Bay Avenue at the old BC Tree Fruits packing house is currently only running at half capacity, 30 beds, because they can't find staff.

"We continue to hire and will open up beds as staffing levels increase," she said.

Up to five centimetres of wet snow is expected to fall over the Okanagan and Kamloops Thursday afternoon and through the evening, with overnight lows expected to hover around freezing.

As much as 20 centimetres of snow is expected over the high-elevation highways like the Coquihalla and the Okanagan Connector in the next 24 hours.

Rempel tells Castanet plans are in the works for the temporary winter mat programs for Kelowna but full details aren't yet available, "all I can say is that [Kelowna Gospel Mission] is concentrating on getting Bay Avenue running fully and do not have the capacity to also run a warming station this year." 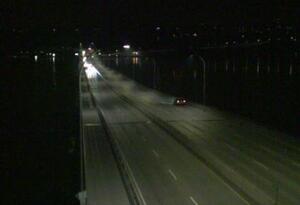