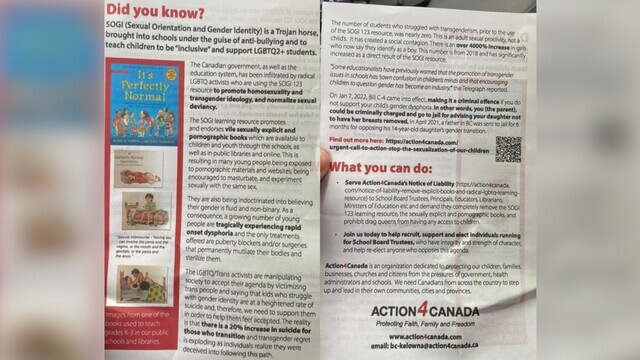 A group of Central Okanagan school trustees are taking exception to accusations made against the district by Action4Canada.

The news release follows statements made by the anti-SOGI 123 group which made a number of false claims related to sexual orientation gender identity (SOGI) education in B.C. schools.

"These baseless and harmful allegations undermine the hard work of our staff and negatively impact our students, many of whom already face serious challenges," the five trustees stated in Monday's news release.

"The trustees signed below strongly condemn these attacks. We will not tolerate this abusive behaviour and reaffirm in the strongest possible terms our support for our teachers, and our superintendent, Kevin Kaardal."

The statement from Action4Canada was in direct response to a Castanet story published a week ago after anti-SOGI pamphlets were found left on vehicles in the parking lot of Watson Road Elementary.

"Sexual orientation, gender identity and expression are protected under the BC Human Rights Code and the Canadian Charter," the trustees further state.

"It is the responsibility of the boards, district staff, administrators, teachers and support staff to provide environments where all students can thrive.

"Inclusive, equitable and nondiscriminatory practices and policies are integral to supporting students."

The trustees, chair Moyra Baxter, Norah Bowman, Wayne Broughton, Julia Fraser and Chantelle Desrosiers say staff in the schools across the district work to provide all students with a safe and welcoming environment which has the full support of of the board.

They call the disinformation being spread by Action4Canada, dangerous and being deliberately spread to try an influence voters prior to the election of a new board Oct. 15.

"We teach our students about the rights and responsibilities of free speech, including protecting human rights.

"The harmful lies and deception by Action4Canada and those affiliated with them underscore the importance of this work.

"It is our hope that the Central Okanagan Public Schools Board of Education will get back to its core purpose, educating students in a safe, inclusive , equitable and inspirational learning environment where each learner develops the attributes and competencies to flourish in a global community." 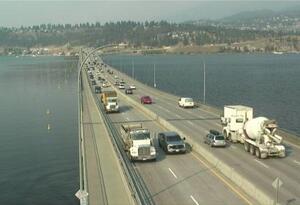