As nights in Kelowna grow colder, a new homeless shelter is nearly ready to open downtown at the former BC Tree Fruits packinghouse on Bay Avenue.

Its 60 beds will replace the 60 that were lost at the end of June when the previous shelter at 550 Doyle close to make way for the UBC Okanagan downtown campus project.

The new shelter will be operated by the Kelowna Gospel Mission, which says its opening is "greatly" anticipated.

"We are hoping that it will bring some relief to some of the pressure we’re seeing on the streets right now," said Mission executive director Carmen Rempel.

"Anybody in Kelowna who has their eyes open can see that we have more people who are visibly homeless living on our streets right now. So we are looking forward to bringing 60 of them inside in the coming weeks."

As winter is approaching, Rempel says the biggest worry right now is the cold overnight temperatures.

"It’s definitely getting colder here," said a resident of the tent city along the Rail Trail. "I had my truck stolen with my I.D. and my wallet and my phone, and I’m not too sure how to start back up again."

Kelowna's designated outdoor camping location for homeless residents at Richter Street and Weddell Place is bursting at the seams.

The city's community safety director Darren Caul says when they opened the site a year and a half ago, it was intended for up to 50 people, a number now far exceeded. A very conservative estimate last month suggested 120 people are sleeping outdoors in Kelowna.

"It’s more than twice the number we had 12 and 18 months ago," Caul said. "Every morning we have bylaw services and police services here to ensure that our situation does not escalate into a 24/7 encampment, which can be of great concern to [the] community from a public safety and health perspective."

Although the new Bay Avenue shelter won’t have beds for all of Kelowna’s homeless population, Caul is happy to see progress being made towards a more permanent solution.

“I’m very proud of the work we are doing in Kelowna with BC Housing to increase the number of beds, which ultimately is our focus, because this is not a solution to homelessness," he said referring to the camping site.

"This is the temporary efforts that we do to deal with the symptoms and as long as we get those more stable longer term housing solutions in place."

A timeline for the open of the Bay Avenue shelter is not known yet, but it is hoped to take place in the coming weeks. The Gospel Mission is currently hiring for staff for the shelter. 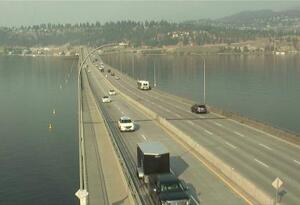