City Park pathway reopens as Phase 2 of improvements wrap up 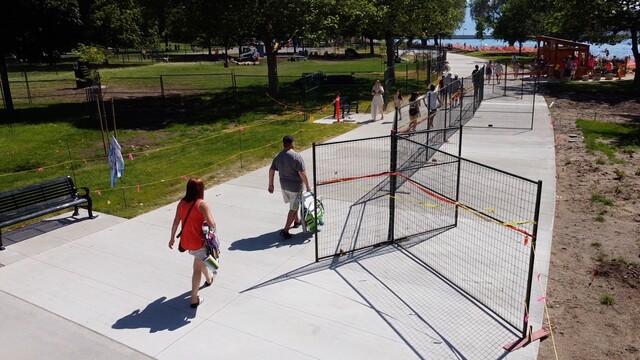 Just in time for the arrival of hot weather, upgrades at City Park are wrapping up.

The new pathway between the Hot Sands washroom and the Cold Sands washroom is now open. It’s further from the water and wider, making it more accessible and hopefully improving safety for pedestrians, cyclists, runners and other users.

Part of the project also involved stabilizing the shoreline along Hot Sand beach with logs to reduce erosion.

The Phase 2 improvements began in February and construction was originally scheduled to wrap up at the end of May.

Workers might be in the park for the next few days doing some finishing touches, but the bulk of the improvements have been completed.

Phase 1, which included pathway improvements from the bridge to Hot Sands beach was completed in 2010.

Phase 3 of the City Park project would see a new pathway extend from the Cold Sands washroom to the foot of Bernard Avenue.

Other improvements have also been proposed. The City of Kelowna applied for a provincial Community Culture and Recreation Grant to build a gathering circle and pier at Cold Sands beach but was denied funding.

You can see the full scope of City Park improvements here.