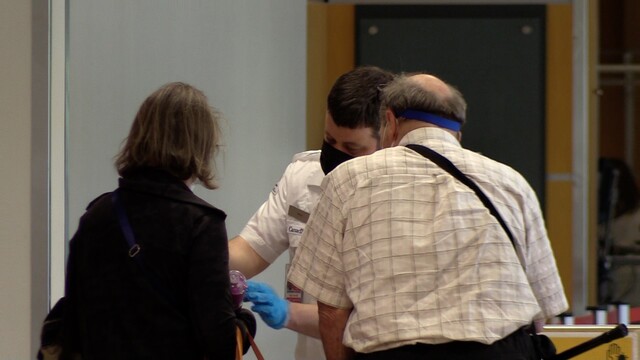 Photo: Cindy White
Kelowna International Airport says the lifting of the vaccine mandate for domestic and outbound travellers and federally regulated workers should help with a staffing crunch.

It should help fill some of the voids in staffing at Kelowna International Airport.

As of Monday, the federal government has suspended its COVID-19 vaccine mandate for domestic and outbound travellers and federally regulated workers, including those in aviation.

“First it really allows people who have been restricted for air travel, to begin traveling and that’s really important economically and for those people who haven’t had an opportunity to travel.

“The other piece is it really allows the aviation industry now to start to attract more employees. Employees who have either been furloughed or who they just simply couldn’t hire because they were not vaccinated,” explains Elchitz.

He says all areas of the industry have been short-staffed, so this should help open the door to more potential employees.

“We feel that’s really going to start to alleviate the issues that we’re having with staffing. Which will result in quicker check-in times, hopefully shorter lines at security and a whole bunch of other issues related to aviation and airports.”

Airports across the country have been plagued with long lines and delays in recent months. It's not just due to staffing shortages but also because of the sharp rise in the number of people taking flights now that pandemic restrictions have been lifted.

Elchitz emphasizes that air travellers still need to get to the airport at least two hours before their flight, and be prepared.

"The other piece that is so important is understand what you can do at home.

"Check in at home, online and when you get to the airport, use the kiosks, the self-service kiosks, to print your baggage tag. And then you get to get in a line that's actually a lot shorter, the baggage drop line, than you would if you have to check in when you're here."