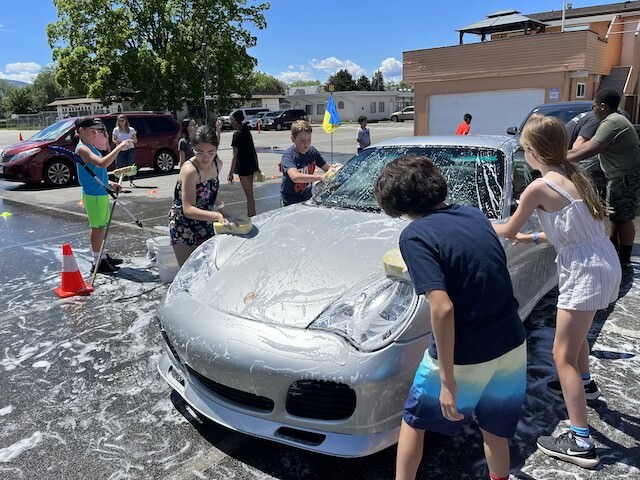 Saint Joseph's Catholic Elementary School hosted a car wash to help raise money for the people of Ukraine as they defend themselves from Russian invasion.

Kate Hopley's 6th grade class came up with the fundraiser themselves as a part of their justice program. They were inspired by a classmate who is Ukrainian and currently has family family overseas.

“The students have really embraced the social justice program in grade six, and they’ve held several special events this year, so this is their last big push at the end of the year in support of their classmate," said Hopley.

"The goal is to raise some money in support of the people in Ukraine, and the goal is to have fun, learn the joy of giving, and that our classmate feels supported."

Nazariy, the young Ukrainian boy, is happy to see his classmates come together at the end of the school year to do something special for him and his family back home.

“It makes me feel proud that we are actually doing something because it’s not only their war, it’s our war. If you could do anything like go to an organization, please help because hundreds of people are dying," he said.

The Kelowna Fire Department took part in the car wash as well, showing the kids how to wash a car with a firehose, and to even let Nazariy ride shotgun in a parked firetruck.

“He had a big excited smile and he wanted to see the fire truck, so we just put him right up there in the jump seat and he had a giant smile on his face, and it puts smiles on our faces too.”

All funds raised at the St. Joesph's Catholic School will help humanitarian efforts in Ukraine.