The Wicker Land delivery van has been recovered.

General manager Dan O’Brien tells Castanet RCMP managed to recover the van, “there is some damage because the van was hotwired and the ignition is all torn apart.”

Staff at Wicker Land Patio Furniture are left scrambling after the company van was hot-wired and stolen from the business's parking lot Tuesday morning.

The incident was captured on camera just after 4 a.m.

The suspect is seen walking up to the van, unlocking the driver-side door with tools, hot-wiring the car and driving off in the span of 20 minutes.

"It looks like he would have done it before since he came with a bag of tools. I'd say he was prepared for it," assistant manager Keith Geronazzo said.

The van is used for a number of different tasks.

"It is pretty important. We use it for deliveries, any kind of in the fieldwork that we would do and of course moving any projects from our store to our warehouse and vice versa."

Just one week prior to the theft, the van was broken into and the back window was smashed.

"We had the back window basically just taped and we were anticipating taking it in for a repair, but the guy beat us to it. It has been rough."

Geronazzo says crime in the area is becoming more prevalent.

"Last year we had fires in the parking lot, our dumpsters are frequently targeted for people either diving in or just dumping their junk in front too."

Kelowna RCMP has been notified of the theft.

"We are now using personal vehicles, but depending if we get the van back at all and what kind of shape it is in we will probably have to look at purchasing a new vehicle and or at least in the meantime renting," Geronazzo added. 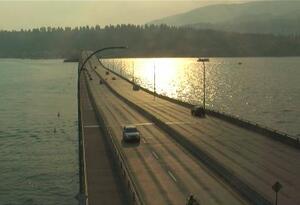