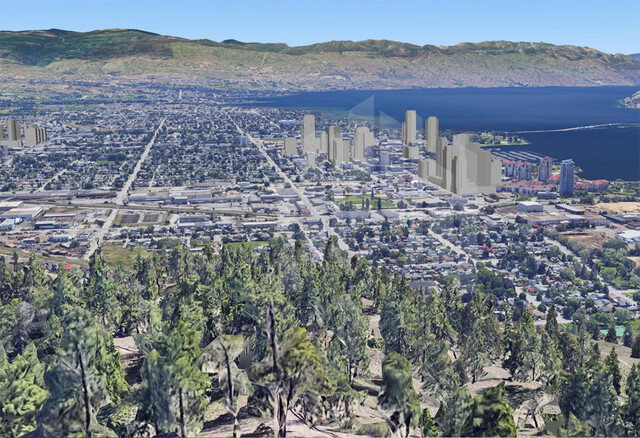 Photo: Eric MacMillian
Potential skyline of Kelowna circa 2031 as envisioned by environmental engineer Eric McMillian a year ago

Kelowna's landscape is forever being altered with as many as 20 large towers on the books for downtown alone. Whether that's a positive or not depends on your point of view. Over the next few days, Wayne Moore looks at where the city is going and how it got here.

Longtime residents of the Okanagan will remember a sleepy little town on the shores of Okanagan Lake when Kelowna was a mere whistle stop on the way to the hub of the region, Penticton.

Much has changed in more than a half century. The Okanagan Lake Floating Bridge, opened in 1958 brought with it a link throughout the Okanagan, a forced amalgamation in 1973 added rural areas of Rutland, Glenmore and Okanagan Mission to the city's growing population while the post-Expo 86 opening of the Okanagan Connector cut the trip from the coast almost in half, further opening the region to tourists and visitors alike.

A city, with few buildings over four storeys in height, grew out exponentially from 19,000 in 1971 to more than 95,000 by the turn of the century, and up with the construction of what, at the time, may have looked like out-of-place skyscrapers.

The Kiwanis Tower at 12 storeys, became the tallest building in the city by far when it opened in 1976. Four years later, Executive House at Leon and Richter came on scene. Although also 12 storeys, it came in 26 feet shorter than the Kiwanis Tower.

They remained the tallest buildings in the city until construction of the Dolphins in 1994 and The Lagoons in 2000, both towering 17 storeys over Okanagan Lake.

With significant population growth came more significant development. While large subdivisions such as Wilden, Kettle Valley and Kirschner Mountain began sprouting up, both residential and commercial towers did as well.

By 2009, 11 such structures up to 17 storeys had already been built while Discovery Pointe Resort next to the Lagoons towered above the rest - the first to surpass 20 storeys - when it opened in 2005.

Since then, four more towers reaching 20 storeys or more have opened around the downtown, including One Water Street East which, at 36 storeys, is the tallest building in the province between the Lower Mainland and Calgary.

While the city has become the darling of migrants across the country, growing at the fastest rate of any metropolitan area in the country, city fathers have determined building up, particularly within the identified urban areas of downtown, South Pandosy, Capri-Landmark, Midtown and Rutland, is preferable to suburban sprawl.

That has led to an extraordinary number of applications and proposals over the last few years, some which have been approved by city council and are under construction, some which remain in the pipeline and others which have recently been brought forward to the city's planning department.

The largest of these collectively amount to 20 towers of 20 or more storeys and more than 4,500 units which could, if all are approved, be built within the next decade.

"I would say there is a chunk of that 4,500 that probably won't happen, but I don't know how big that chunk is," says planning director Ryan Smith.

"Some of those at the approving stage won't get approved, while some will get approved but interest rates will go up again in June, and all of a sudden they don't make financial sense so they won't happen.

"Others may come along to replace those, because there seems to be a lot of demand out there."

All 20 proposed towers are within the downtown core, or just outside, and all are concentrated north of Bernard Avenue.

Housing is needed as the city expects several thousand people to migrate over the next 20 years, and to help alleviate the pressure on skyrocketing rental and purchase prices.

But, what about the pressure on present infrastructure. 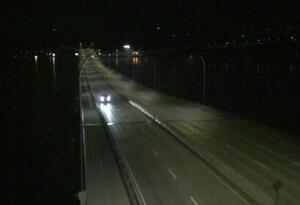