April in the Okanagan was drier and cooler than usual.

While March saw warmer than normal temperatures across the region, temperatures were somewhat lower through April.

“The month of April for the Kelowna and Okanagan region was slightly cooler than normal, by about two degrees,” said Environment Canada meteorologist Colin Fong.

“As far as precipitation goes, it was also slightly dryer at the same time. We were about 20% lower than normal in terms of rainfall.”

According to Fong, the normal average temperature for April usually hovers around 9 C, but this year, temperatures have dropped to an average of 7 C. As well, this April was Kelowna's third-driest, over 117 years of recordings.

“The interior, especially around the Kelowna and Okanagan region, was typically drier than normal. For Kelowna specifically, they received 20 per cent less rainfall than normal,” said Fong.

Despite the month of April being a little bit cooler than usual, it hasn’t stopped people from jumping into Okanagan lake. Local resident Richard Amanty and his friend took the plunge Saturday morning.

“Every Saturday we go for a run and then we jump into the lake, even during winter. And now the weather is getting much better and much warmer, and much more fun,” Amanty said with a smile.

It might be too early for most people to be jumping into the lake to cool off, but heading into the month of May, the weather should take a turn for the better. Temperatures are expected to hit a high in the low twenties next week, with a high of 23 by Wednesday. 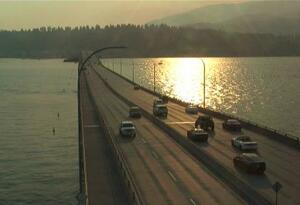