Peachland woman defends herself and two dogs against coyotes

A Peachland woman says she was afraid for her life after two coyotes attacked her and her dogs while out on a morning walk Friday morning.

Sandra Stratulat was walking her two dogs, a cocker spaniel and a golden retriever, around 9 a.m. near the trails south of Ponderosa Road and north of Gladstone Trail in Peachland when the frightening incident occurred.

“I was walking my dogs about seven city blocks from my house, so quite a ways into the field,” said Stratulat.

She says her cocker spaniel was off-leash when it came into contact with the coyotes, while her golden retriever was still by her side.

“My (cocker spaniel) caught a smell, I thought she was chasing birds, and by the time I caught up to her there were two coyotes after her. I was screaming, of course, and I don’t know how she got away because they were in like a little culvert; I couldn’t see her but I could hear her,” said Stratulat.

“I was just like three feet away from her and I was calling her name and she came running at me. there was blood all over her mouth and her ear, and I thought that was it.”

She said the blood on her cocker spaniel was the coyotes', as her dog “took a chunk out of one of them.”

When her cocker spaniel came running back to her, she began to pick it up to put it on the leash, and as she did, one of the coyotes came running towards her.

“I stepped in front of my dogs and it kind of looked at me. And I’ve got a prosthetic leg, so I kicked at it with my leg and it did connect. I have no idea where, I just know I hit it and I turned around and I started pulling my dogs as fast as I could," she said.

As she was getting away, she saw a woman nearing the area, so Stratulat yelled to the woman to pick up her dog and leave.

Stratulat said she got closer to her home, when the woman “hollered at me that they were following me,” and when she turned around, she caught sight of one of the coyotes about 20 yards away from her.

“I was just so panicked, it was so surreal,” said Stratulat.

Stratulat said she’s seen coyotes around the area in the past, but she's never been attacked.

Neither Stratulat nor her dogs were seriously hurt during the incident, but she said her cocker spaniel is a bit sore. She's “shaken up” by what happened though.

“Somebody’s going to get really hurt. I’m fortunate that I didn’t but … being 60-years old with one leg, I was so scared that I was going to die, it was just unbelievable.”

The BC government's wildlife website says: “it is not normal for wolves or coyotes to attack or pursue humans, especially adults. Aggressive behaviour toward humans by wolves or coyotes is usually the result of the animal becoming conditioned/comfortable with people as a result of direct or indirect feeding.”

Statulat reported the incident to the BC Conservation Officer Service. Residents are encouraged to call the COS Call Centre at 1-877-952-7277 to report a wolf or coyote if it poses an immediate threat or danger to public safety. 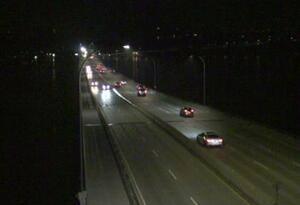